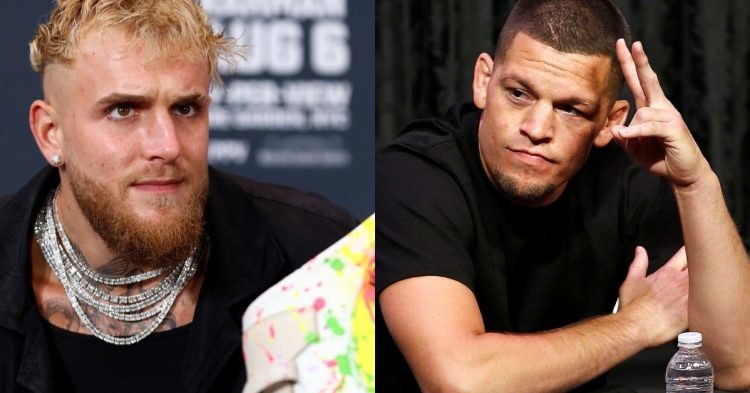 Jake Paul vs Anderson Silva goes down this Saturday, October 29th. For the first time in his career, Paul is going up against someone, who is an elite striker. So, the challenge infront of him is monumental. However, it looks like his potential next opponent, Nate Diaz, will be in attendance to witness Paul’s bout against Silva!

Nate will be at the event to corner his teammate Chris Avila. Avila is fighting Doctor Mike in Jake Paul’s undercard this weekend. In a recently released video, Nate was seen in the training sessions with Chirs. Diaz is currently taking some time off from MMA. In his last fight, Diaz submitted Tony Ferguson at UFC 279. Afterwards, he stated his intentions to box in the future.

Prior to his UFC exit, Nate posted several messages where he wanted the UFC to release him. During that, the 37-year-old also posted a photo of Jake Paul. It sparked some rumours that he will fight Jake Paul next. Prior to Jake’s confirmation of the Silva fight, there were rumours of Diaz being his next opponent.

If Jake manages to defy the odds and beat the former UFC middleweight champ, there is no doubt that Nate Diaz will be high on the list of Jake’s next opponents. Even Jake himself spoke about the fight previously.

The Problem Child expressed his wish to fight Nate Diaz multiple times before. After Nate’s last UFC fight, Paul praised the younger Diaz brother. Jake also gave Nate a perfect rating and stated, it was fun to witness the MMA legend in action.

“10 out of 10 man. He was entertaining, he was fun, he had great striking and then he finished with a submission. It was damn near flawless and it just sets up a massive fight hopefully for us one day. But for now, October 29th, Anderson Silva.”

Nate was originally scheduled to fight Khamzat Chimaev. But Nate ultimately fought Tony Ferguson, as Khamzat weighed in 7.5lbs over the limit. It worked out fine for Nate in the end, as the Ferguson fight was much more balanced in terms of competitiveness. It was a great back-and-forth fight between two UFC legends, who were somewhat past their primes. The fans also loved seeing the two beloved figures having a fun fight.

Nate’s win also increased his stock value as it was his first victory in almost 3-years. If Diaz came into the Paul fight with a bad loss to Khamzat, it would have diminished the interest in the fight significantly. But Nate had a great win in his last fight and it makes the Jake Paul fight even more appealing to the masses. But, as Jake himself said, he has to beat Anderson Silva first.

However, fans are already coming up with theories of their own. Underneath the Instagram video, some fans kept their opinion on why Nate is in Arizona for the event. User fightcave_creations wrote, “It wasn’t an accident that Avila was put on that undercard.” User @thecombatcomrade took it one step forward as they wrote, “Nate and Jake altercation inbound.”

What are your thoughts on the matter? Do you think Jake Paul and Nate Diaz will go after each other at least once during the fight week? Let us know in the comments down below.