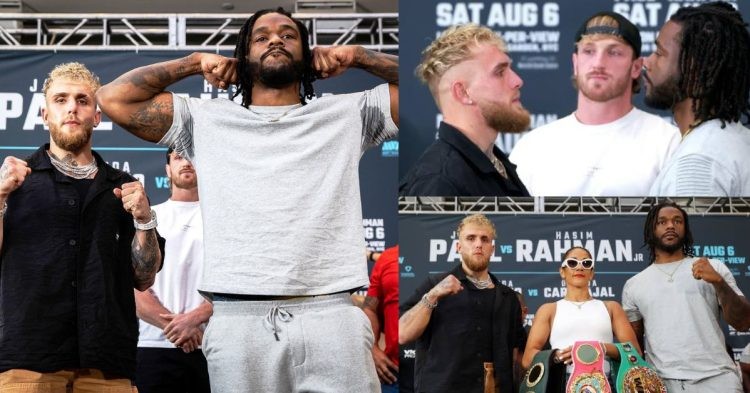 YouTube sensation Jake Paul will be back inside the boxing ring next month on August 6th as he takes on former sparring partner Hasim Rahman Jr on the Showtime PPV. This highly anticipated fight card will take place at the iconic Madison Square Garden stadium in New York.

Speaking about this matchup, initially, The Problem Child was scheduled to fight Tommy Fury in the main event of this card. However, this fight had to be cancelled due to Fury’s visa issues.

Thereafter heavyweight boxer Rahman Jr stepped in and accepted this fight on short notice. As we build-up to this fight, all eyes will be on Jake as he faces a tough challenge against a professional boxer with a ton of experience under his belt.

Consequently, with less than a month left for this fight, a kickoff press conference for the Paul vs Rahman Jr PPV took place today in New York. For this press conference, Jake Paul sat alongside co-main event superstar Amanda Serrano.

Meanwhile, his opponent Hasim Rahman Jr and his father who is a former champion joined the media event for a discussion. After a banter-filled press conference where both the main event stars traded verbal shots, Jake and Hasim stood in front of each other for the much-awaited face-off.

As expected the faceoff was quite intense with both fighters staring down and exchanging words. However, after taking a look at the size and height of the two fighters, The Problem Child will face a significant disadvantage in this matchup.

How will Hasim Rahman Jr trouble Jake Paul with his size advantage?

Out of the two boxers, Hasim Rahman Jr is much more experienced than Jake Paul. Hence it is needless to say that the size advantage that he possesses along with his experience will help him significantly in this matchup.

He has a four-inch reach and a one-inch height benefit which will help him attack more efficiently without taking any risks. Unlike the Tyron Woodley fight where The Problem Child had the size advantage, he would most likely need to work much harder to close the distance and attack Hasim in this matchup.

Because in his previous fights, he used his reach advantage to land a lot of jabs which helped him win a lot of rounds. Therefore Jake and his team will need to come up with a new gameplan to counter this disadvantage and go home with yet another win on August 6th.