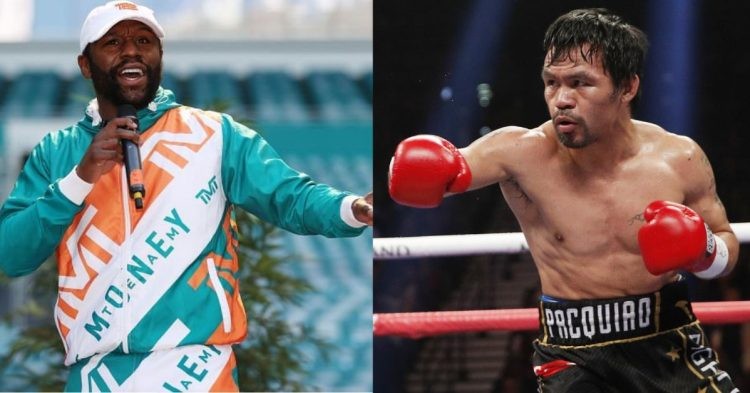 Floyd Mayweather stepped inside the ring for his second exhibition bout in Japan as he took on Mikuru Asakura in a three-round bout at the Saitama Super Arena. The former world champion did what was expected from him and won this exhibition bout in devastating fashion.

After attacking the body in the first round, Mayweather pushed the pace and landed more shots. In the dying seconds of the round, Money Mayweather dropped Asakura with a right hook and the referee soon stopped the fight.

Floyd Mayweather knocked out Mikuru Asakura in the second round of their boxing exhibition bout 🥊pic.twitter.com/fTMr3kE97o

With this stoppage win, Floyd Mayweather maintained his dominance inside the boxing ring and claimed his second win of the year. But several fans questioned the finish as it appeared from the replays that Mikuru took a dive. Nevertheless, Mayweather put on a show for the fans and subsequently, fans were interested in knowing who he fights next.

There were rumours of a rematch against Manny Pacquiao and in the post-fight press conference, one of the interviewers addressed this and asked Floyd whether he would collide against his former rival once again. Money did not hesitate and thwarted all the rumours of fighting Manny and confirmed that he would not fight any former champion.

Floyd Mayweather confirms he absolutely will not be fighting Manny Pacquiao in an exhibition rematch: “I retired from the sport, I didn’t let the sport retire me… I’m not going to take punishment to the point where I can barely walk and barely talk.”

“I’m not going in there with no former fighters, former world champions putting any more abuse on my body. I retired for a reason. I’m going to take no punishment to the point where I can barely walk and barely talk.”

It is needless to say fight fans are disappointed as their rematch would be a treat to watch. Besides, it would have been a great matchup for Floyd to prove that he is still the best boxer in the world.

What’s next for Floyd Mayweather after his win over Mikuru Asakura?

A few weeks ago, rumours started to circulate online that Floyd Mayweather will make his return to the ring once again in December this year. KSI’s younger brother Deji was reported as his next opponent and this news took the whole social media by storm.

Because there were other options that were more popular and skilled than Deji Olatunji. However, from Mayweather’s recent post-fight press conference, it looks like this matchup is more likely to happen as Floyd denied stepping inside the ring against any former fighters.

Considering the fact that Deji’s coach confirmed that there are talks going on between the two camps, we could hear an official announcement regarding this matchup soon. Do let us know in the comments section who you think should be Floyd Mayweather’s next opponent?