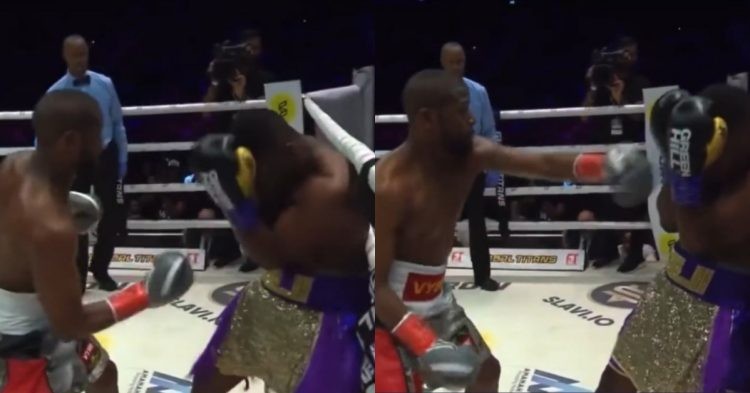 Floyd Mayweather completed his 3rd exhibition boxing bout of the year on November 13th. After fighting Don Moore and Mikuru Asakura earlier this year, Mayweather TKO’ed YouTuber-turned-boxer Deji in the sixth round of their contest in Dubai. Deji, who is KSI‘s brother, actually landed a couple of good punches on Floyd. But, fans noticed something unusual during the bout.

Throughout most of the bout, it was evident why Floyd is still a dangerous fighter even at the age of 45. He pushed Deji around the ring before finally putting an end to the contest in round 6. However, eagle-eyed fans pointed out a brief moment of exchange where Floyd had the chance to land some damaging shots. But, instead of doing so, Floyd faked the punches and let Deji survive.

mayweather is missing the shots on purpose 😭😭😭 pic.twitter.com/4tqTbsVuod

From the clip, it is clear that Floyd could easily have hit Deji’s midsection. But it looked like he did not want to hurt the YouTuber who only has a pro boxing record of 1-0. Prior to fighting Floyd, Deji Olatunji had two other amateur/exhibition bouts. One of them was against Jake Paul in 2018. Paul beat the London native in the 5th round of the bout.

I gave Floyd a black eye

However, it seemed like Deji was somewhat happy with his showing against Floyd Mayweather. He caught Floyd with a big punch in the bout, which left a mark on his face. The 25-year-old bragged about it on Twitter. Even his brother KSI, who apparently ghosted Jake Paul during the event, also posted a message of support for his brother.

Proud of you bro @Deji

Floyd Mayweather’s (boxing record 50-0) last professional bout was against former UFC champion Conor McGregor in 2017. Although Money Mayweather won the bout via a 10th-round stoppage, McGregor had some decent success. However, fans and pundits speculated whether Floyd let Conor have some early success intentionally or not. But Mayweather never commented on the issue.

In bouts against the likes of Logan Paul and Don Moore, Mayweather obviously held back. Instead of emptying the gas tank, Floyd cruised through the contests. It was on full display once more against Deji. Although he got the stoppage, Floyd never had to push on the gas paddle and dig deep. So perhaps not landing hard shots was Mayweather’s way of having an easy day at the office.

But fans were not too forgiving. While some ridiculed the bout, others stated their concern that moments like this may hurt the sport of boxing.

So boring deji isn’t even aware his left arm works

Live scenes of Floyd in the ring pic.twitter.com/oqSCO1xGcv

Why was this ever a fight💀💀

The downfall of boxing is actually sad