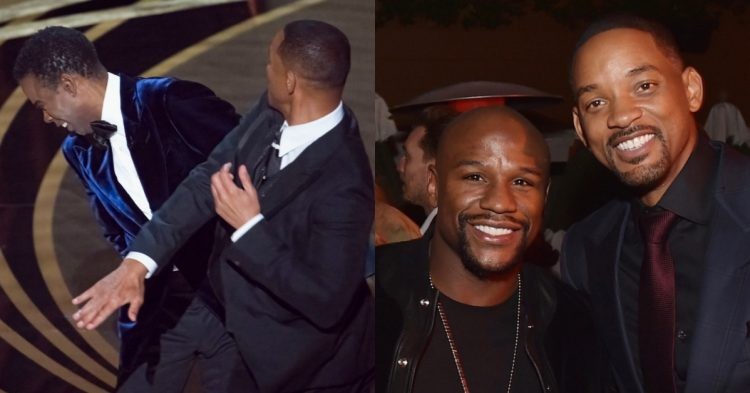 Will Smith credits Floyd Mayweather as his saviour! During a private screening of his upcoming movie Emancipation, Smith revealed the heartwarming story of Floyd’s friendship.

March 27th was one of the most memorable days of Will Smith’s life. On that day, Smith won his first Oscar for his role in King Richard. But, it was not the only headline from the Oscars ceremony that day. During a segment of the award ceremony, Will slapped veteran comedian Chris Rock. Rock made jokes about Smith’s wife and the 54-year-old actor retaliated by slapping Rock.

While a certain portion of the fans supported the actor, Smith faced a ton of criticism. Comedian and UFC commentator Joe Rogan condemned Will’s actions. The Academy of Motion Picture Arts handed Smith a 10-year ban for his actions. Several of Will’s projects were also put on the back burner. But, somebody who stuck by Will Smith, was Floyd Mayweather.

In a recent video, the Oscar-winning actor revealed how Mayweather played a positive role in his dark time. Apparently, Mayweather called the actor 10 days in a row, just to make sure that Will was doing alright. Smith appreciated the gesture and called Mayweather a friend.

#WillSmith was in a dark place after he slapped #ChrisRock at the Oscars, but he had a champion in his corner: #FloydMayweather. Hear Will’s tribute to TBE, here: https://t.co/D6SxI0rl2K pic.twitter.com/WdzcQwkenY

“So, you know we met each other, we seen each other around. But we weren’t, you know, we weren’t like friends. And the day after the Oscars, for 10 days, he called me every day. And he was like, ‘Ay, you know you the champ right? You good? You know you the champ right? I want you to hear my voice say it.’ I was like everyday, he called me and it’s like, that’s my dude forever right there.”

Fans can catch Floyd Mayweather in action this November

Floyd Mayweather will fight Deji Olatunji on November 13th at the Coca-Cola Arena in Dubai. But it will only be an 8-round exhibition bout. Floyd’s last exhibition was against Mikuru Asakura. Mayweather beat Asakura in the second round via TKO.

Mayweather hasn’t competed professionally since his win over Conor McGregor in 2017. Afterwards, Money Mayweather had exhibition bouts against the likes of Logan Paul and Tenshin Nasukawa.

Floyd Mayweather in the gym staying ready for Deji on Nov 13th. Still got it at age 45…

But there are reports of his return to pro-boxing. Recently Floyd discussed a possible return against Conor. He wanted $100 million for the rematch. He tried to bait Conor into accepting the fight by stating that the former UFC champion hits like a YouTube fighter. Although Conor stated that he would beat the former boxing champ in a rematch, McGregor ultimately turned down the offer.

After his exhibition bout against Deji, Mayweather has some lucrative options next. He can call out Deji’s brother KSI after the bout. KSI is a popular British YouTuber who has a history in boxing. He beat Logan Paul in a professional fight. So it would definitely be a big event. But if not KSI, Mayweather may just call out Jake Paul, who fights Anderson Silva this weekend.