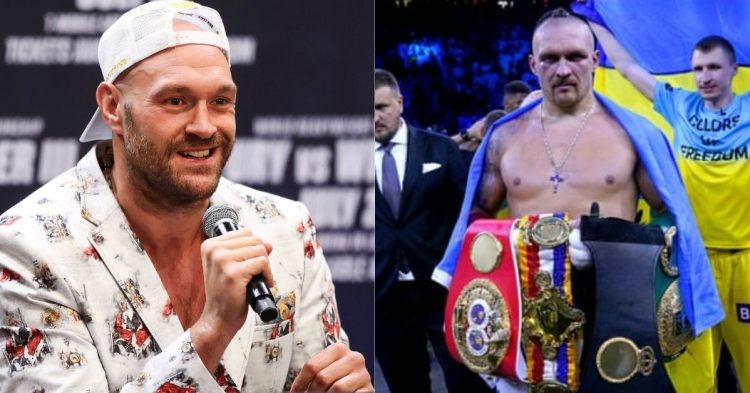 Oleksandr Usyk successfully defended his unified heavyweight titles last weekend after defeating Anthony Joshua via split decision in a rematch. Following Usyk’s brilliant victory, arch-rival Tyson Fury called out the Ukrainian heavyweight and confirmed that he is ready to come out of retirement.

A few hours ago The Gypsy King has indicated that stepping inside the ring to take on Oleksandr Usyk for the undisputed heavyweight championship fight will take a big fight purse. The British heavyweight has demanded a staggering $500 million to face Usyk.

It is needless to say that this matchup is one of the biggest boxing fights of the decade as it will determine the undisputed heavyweight champion and one fighter’s undefeated streak would come to an end.

Surprisingly, Fury’s asking price to make his boxing return is mind-boggling, considering the fact that no other boxer in the history of the sport has received such a fight purse.

Soon after the result of the Usyk vs Joshua 2 fight was announced, Tyson Fury slammed the champion as well as AJ for their performances. Thereafter The Gypsy King made a bold prediction that he would knockout both Usyk and Joshua on the same night.

Fury has always been confident in his skills and is very sure that he would put on a boxing clinic and demolish The Cat to become the undisputed champion.

Fury has always been confident in his skills and is very sure that he would put on a boxing clinic and outclass The Cat to become the undisputed champion. With both heavyweights interested to face each other next, there is a high possibility that we could witness this historic matchup.

Moreover, Usyk has also expressed that if he does not face Tyson Fury next then he will walk away from the sport. Besides, Frank Warren has confirmed that the fight purse will be split 50/50 between the two heavyweights. The only difficult thing for the promoters would be to oblige to Fury’s demands of half a billion to fight Usyk.

Do let us know in the comments section your thoughts on this matchup and share your opinion on how much will the two heavyweights receive as their fight purse for this super fight.