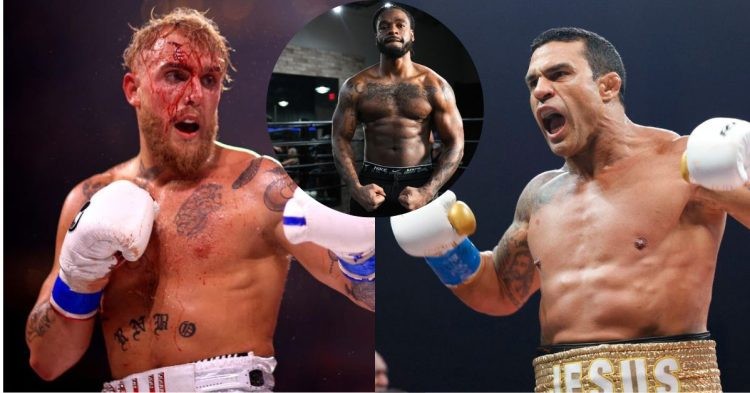 Jake Paul has been scheduled to fight UFC legend Anderson Silva in a boxing bout on October 29th on Showtime PPV. However, before that, he was offered $30 million to face another UFC legend, Vitor Belfort.

According to Paul’s other long-time rival, Hashim Rahman Jr., the internet star turned down the $30M pot and took the Silva fight instead.

“He didn’t wanna fight Vitor, he declined that,” Rahman said.

When asked if Belfort is a harder opponent than Silva, Hashim said: “Personally I believe so. He’s faster. I think he’s a better striker.”

Jake has a long list of opponents ready to fight him and Hashim is one of them. After their boxing bout was canceled, Hashim stated that Jake pulled out because he is afraid and doesn’t want to face Belfort.

However, part of the reason might have to do with Belfort and his crazy knockout power. Vitor is well known for being a powerhouse. He most famously hit Michael Bisping in their fight, with a head kick that caused Bisping to lose his right eye.

But he has a long tarnished history of steroid use too. Belfort has been suspended multiple times for using performance-enhancing drugs like TRT and 4-hydroxytestosterone.

The Nevada State Athletic Commission suspended the Brazilian fighter for nine months after testing positive for the steroid after fighting Dan Henderson back in 2006. On many occasions, Belfort tested positive for PED and TRT but because there was no strict rule against the usage of TRT, he was given the green light.

But after NASC banned TRT and other steroids, he was caught in the act. Especially when he had to pull out from his fight against Chris Weidman.

Jake Paul was called out by Vitor Belfort after his stoppage win against boxing legend Evander Holyfield, but it seems Paul isn’t that interested in fighting him.

After scoring the first win since his boxing debut, Belfort wasted no time in calling out internet star Jake Paul, with Triller co-founder Ryan Kavanaugh putting a massive $30M offer on the table for the YouTuber-turned-boxer.

After getting the win, Belfort called out Jake and said: “We’ve got $25m. Winner takes all! Let’s go Jake Paul, stop running from me. He earned my respect, but he’s still a Disney kid! Let me teach you a lesson.”

Paul is currently one of the most talked about names in combat sports since the rise of celebrity and YouTube boxing in the past year. However, it seems that ‘The Problem Child’ would not entertain the idea of fighting Belfort as he took the fight against Anderson Silva for his next bout.

And after fighting Silva, Jake has already stated that he wants to fight Tommy Fury, the half-brother of WBC heavyweight champion Tyson Fury, in his next fight.