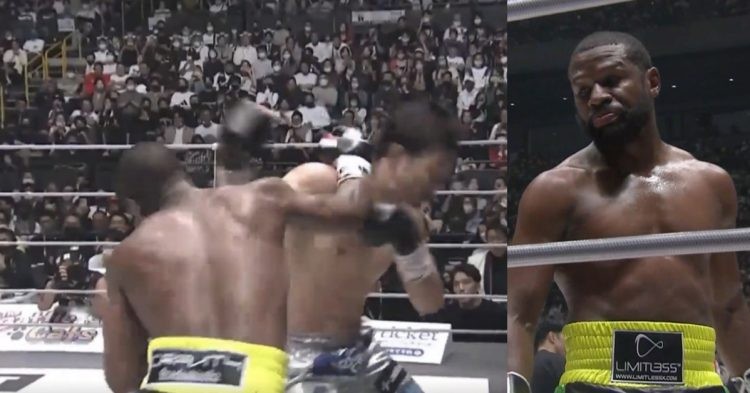 Following his last exhibition fight against Don Moore, Floyd Mayweather returned to the ring once more against Mikuru Asakura. But unlike his last fight, this one did not go the full distance. Mayweather stopped Asakura in the second round of their fight.

The 45-year-old fought Asakura in the Saitama Arena in Japan. Although Floyd’s last performance could be labelled as somewhat tame, this one certainly was not. From the very first round itself, both Floyd and Mikuru brought the heat to the ring. While the Japanese fighter caught the retired boxer off-balance a few times, Mayweather also did some damage too.

A body shot in the closing minute of Round 1 was especially a nasty one. They did not slow down in the second round either. Similar to the previous round, Floyd invested in the body shots to set up a big right hook that dropped Mikuru. Although the punch was not particularly the hardest one, it was precise and Asakura could not get back to his feet on time.

Fans may wonder when they will get to see Floyd in action next. They will not have to wait for too long as Mayweather returns to the ring on November 13th against YouTuber turned boxer, Deji. Deji is the brother of another superstar celebrity boxer KSI. Depending on what may happen in the fight, fans may see a fight between Floyd and KSI early next year.

This is not the first time when Floyd Mayweather has fought an exhibition fight in Japan. He took on Tenshin Nasukawa inside the same arena in 2018. Tenshin, who was a great kickboxer, did not have much experience in boxing, on top of that, Floyd had a massive size advantage over him. Mayweather ended up stopping him in the first round.

Even in this case, Mikuru Asakura is an MMA fighter with a record of 16-3. He fights in the featherweight division of RIZIN. Although he is extremely popular in Japan and has great skill sets, the 30-year-old is not a boxer and it was evident during the fight. To be fair to him, he did have some great moments in the fight. But Floyd’s experience was too much for him.

Despite putting on a relatively entertaining fight, it does not look like the fight has captured the audience. While some found it boring, others think it was scripted. Even UFC superstar Dustin Poirier chimed in and stated his amazement that the fight even took place as there was no marketing for it.

it looked like a dive live, but that was a nice punch to side of head

So he missed the punch and still knocked him out?

This boxing match was FAKER THAN A RICK ROSS DIET….The dive at the end was PRICELESS…🤣😂🤣

You know it’s scripted when a man from the corner immediately enter the ring acting to check the boxer even though the fight is not yet declared.

When did he get to Japan?

However, boxing champion Claressa Shields was more complimentary towards her colleague. She shared her excitement in a tweet and it looks like Shields quite enjoyed that knockout from Floyd Mayweather.

Omg @FloydMayweather knocked his ass out!!!!! 😂😂😂😂 exhibition my ass! I can’t stop laughing!

Did you have an opportunity to watch the fight? If you did, was the fight scripted in your opinion? Let us know in the comments down below.