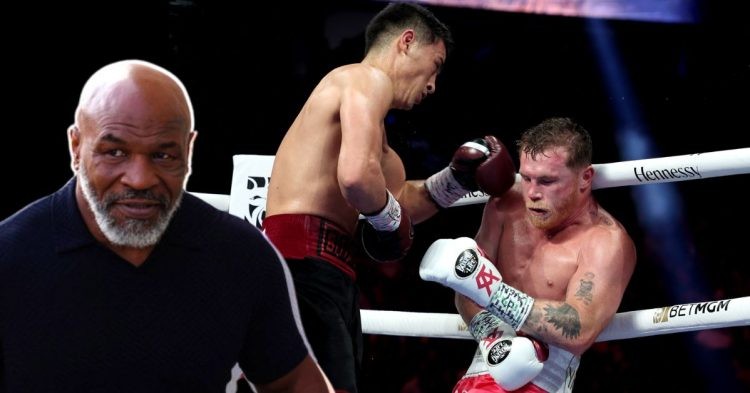 Safe to say, losing after almost a decade sent shockwaves throughout the boxing community with the Mexican champion earning both criticism and support from fans around the world. Mike Tyson’s comments after the fight particularly stood out, after he opined on the main reason why Canelo Alvarez lost against Dmitry Bivol.

Regarded as one of the greatest boxers in the history of the sport, Mike Tyson had a word or two to say about Canelo Alvarez’s loss against the Russian fighter. Tyson opined how Canelo’s inability to use his jab effectively cost him the fight.

“I just think if Canelo had used his jab effectively, hard, his opponent wouldn’t have been able to come in,” he said. Dmitry Bivol came all guns blazing at Canelo, picking up a comfortable victory against the Mexican fighter. He not only charged in, but seemingly had all the answers to Canelo’s attacks, and his aggressive approach.

Mike Tyson emphasized Bivol’s ability to come in and land combinations on the multi-division champion because of Canelo’s lack of defense. “The guy (Bivol) was coming in because he wasn’t worried about Canelo’s jab. So, he got more aggressive, he got brave.” Tyson further added.

Canelo admitted he felt like he was winning the fight and did not know he was losing on the scorecards. The Mexican boxer revealed he fell short of his game plan and opined how he should have been more aggressive in his approach.

Will there be Dmitry Bivol vs Canelo Alvarez 2?

Canelo Alvarez dropped down to the super middleweight division after the loss against Dmitry Bivol to take on Gennadiy Golovkin in the trilogy fight. Alvarez returned to the winning column, picking up a unanimous decision victory against the middleweight legend.

Earlier, Bivol had negated any possibility of fighting Canelo Alvarez again in a rematch. However, more recently, Bivol has expressed his desire to fight Canelo again, and revealed that he will take on the Mexican fighter again should the opportunity arise. In a twist, Bivol wants to do it at the super middleweight division and for Canelo’s undisputed titles.

🗣️ “If the fight is possible, let’s do it.” @bivol_d says he would be motivated to drop down to 168 to rematch @Canelo for undisputed at super middleweight 🔥

Canelo Alvarez has also confirmed that fighting the Russian fighter is at the top of his priority list, and is aiming to fight Bivol in September, later this year. “The idea is to return in May with a tuneup fight to see how I feel and then get the rematch against Bivol in September,” Alvarez said, per Salvador Rodríguez of ESPN.

Canelo Alvarez is expected to return to the ring later this year in a tune-up fight in preparation for Dmitry Bivol and the duo could most likely share in September 2023.