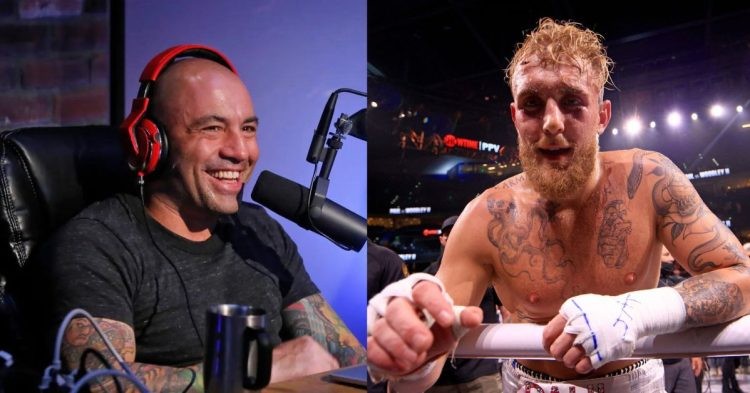 Famous UFC commentator Joe Rogan has given his verdict on a potential boxing fight with Jake Paul. Rogan is a lifelong martial artist and competed actively in his youth. He is mostly known for his Taekwondo and Muay Thai kicks that he posts on his social media.

On the other hand, YouTuber -turned- boxer Jake Paul is establishing himself in the world of professional boxing. Paul has faced and knocked out former UFC champions Tyron Woodley and Ben Askren. Despite that, many fighters and fans have sidelined Jake’s boxing skills.

However, as per Rogan, Jake is a legitimate boxer and with his constant improvements, Paul can become a world-class boxer soon. In an episode of the JRE podcast, Rogan talked about Jake’s rise in the boxing world and discussed how he knocked out Nate Robinson. Rogan said:

“When you look at how he knocked Nate Robinson out, that shorthand that he threw was very skillful. That was a real punch. It was perfectly placed and he can hit hard.”

When Andrew Schulz asked if Paul has any chance of beating Rogan in a potential boxing fight, Rogan said:

Rogan then praised Jake’s skill set and discussed how he knocked out Woodley with a single punch. According to Rogan, if Paul was to focus on boxing than doing podcasts and trolling on the internet, Paul might go a long way in the world of boxing.

Since the rise of YouTube boxing and Jake Paul, many famous influencers have decided to venture into boxing. Jake’s brother, Logan Paul is also a boxer and has faced Floyd Mayweather and fellow YouTuber-turned-boxer KSI. However, Jake is the better boxer with an unbeaten record.

‘The Problem Child’ will face UFC legend Anderson Silva in a boxing match. As per many critics, Silva will be the biggest test in Paul’s boxing career. Silva is an elite striker and has built his name in UFC for his world-class striking skills.

Following his retirement from MMA, Silva has ventured into boxing and is showcasing his astounding boxing skills in the ring. ‘Spider’ is coming off a knockout win over former UFC champion Tito Ortiz. However, as pointed out by many analysts, Silva is old now and Paul might have a shot at beating the UFC legend.

After facing Silva, Paul has a long list of opponents. Recently, there were talks of Paul facing Nate Diaz in a boxing ring. There were also some rumors of Jake fighting Tommy Fury later this year.