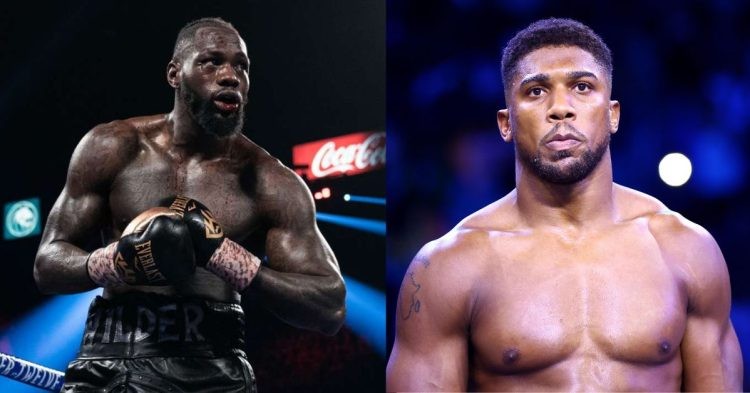 Deontay Wilder is eyeing for a super-fight against Anthony Joshua

Former heavyweight champion Deontay Wilder is back with a scary knockout win over Robert Helenius. Wilder stopped Helenius with a thunderous knockout punch in the opening round of their bout on Saturday night.

With this highlight win, Wilder has made a statement win in his much-anticipated return to the ring after his loss to Tyson Fury. Helenius was Wilder’s sparring partner during his fight with Fury and was coming off with two straight knockout wins over Adam Kownacki.

However, Wilder easily dropped Helenius in the first round with minimal struggle while displaying insane power. After this KO, fans are now demanding a fight between Wilder and Anthony Joshua.

Just after Wilder’s KO win against Helenius, Andreas Hale, the senior editor for combat sports at The Sporting News and formerly DAZN took to Twitter and wrote:

“I know it’s not happening next but dammit I want Deontay Wilder vs. Anthony Joshua in 2023.”

I know it’s not happening next but dammit I want Deontay Wilder vs. Anthony Joshua in 2023.

After witnessing Wilder’s performance, fans are a little concerned about Joshua taking the fight. While some fans stated that ‘AJ’ has been ducking Wilder for years, another fan had this to say: “Joshua has been through a lot already. He is just a victim right now in all these matchups.”

Joshua has been through a lot already.
He is just a victim right now in all these matchups.

Some fans believe that Joshua has been a victim in his recent fights as he has suffered two back-to-back losses against Oleksandr Usyk. Joshua’s last win came against Kubrat Pulev back in 2020.

After that, Joshua had to deal with two losses in a row, but now, he is looking to make a comeback at the start of next year. Joshua was previously rumored to face Fury in a blockbuster super-fight; however, it seems that fight is much more unlikely to happen.

Deontay Wilder marked his return to the ring with a phenomenal performance against Helenius. This victory will set him up for an opportunity to face high-profile fighters including Oleksandr Usyk, Andy Ruiz Jr., and Anthony Joshua.

Looking at the history of Wilder and Joshua, it would be fair to assume that Wilder is more interested in a clash with Joshua over anyone. After suffering his third pro loss at the hands of Usyk, Joshua hinted to fight again this year and also stated that he is willing to fight anyone.

Wilder and Joshua have had a long on-and-off discussion about a super fight while both of the heavyweights were undefeated. However, this fight was never made official. A fight between Joshua and Wilder was previously in talks about in 2019 and 2020.

The Bronze Bomber held the WBC title while Joshua was the WBA (Super), WBO, and IBF champion. After suffering two stoppage defeats in the last two fights against Fury, Wilder considered retirement.

Now, it seems that Wilder is willing to fight for a few more years and is now more focused to fight Joshua in near future. Ahead of his fight with Helenius, Wilder expressed his desire to face off against the British heavyweight in Africa.

As for Joshua, he recently failed to reach terms with WBC champion Fury, which makes him a potential opponent for Wilder. His recent losses might be the reason why Joshua will need some time to bounce back.

As per sources, ‘AJ’ is rumored to face a top fifteen-ranked opponent in early 2023 after a potential super fight with Fury fell off last month. With both men on the comeback trail, it looks like Joshua vs. Wilder could happen in 2023.