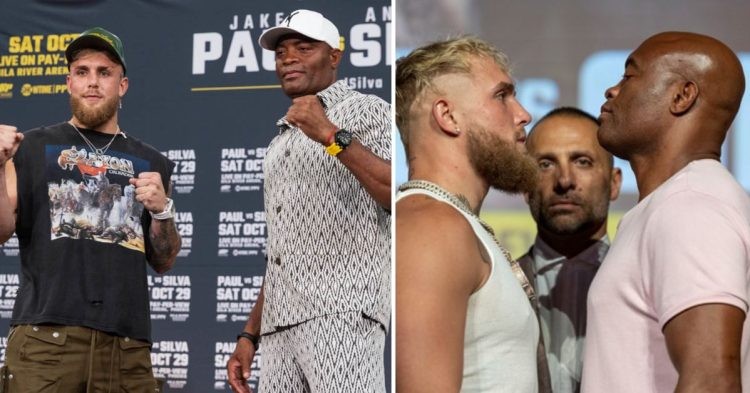 Jake Paul returns to the boxing ring against UFC legend Anderson Silva this weekend on October 29, inside Desert Diamond Arena in Glendale, Arizona. Jake Paul is undefeated inside the boxing ring, having gone 5-0 since he turned professional. Paul’s last fight came in the form of a KO win over Tyron Woodley back in December of 2021.

Meanwhile, Anderson Silva, since retiring from mixed martial arts has made a name for himself inside the boxing ring, having gone 3-1 in his professional boxing career. Silva’s sole loss inside the boxing ring came way back in 1998 when Spider fought Osmar Luiz Teixeira in his hometown, Brazil.

A post shared by Anderson “The Spider” Silva (@spiderandersonsilva)

It’s an exciting match-up and one that definitely has the attention of fight fans from around the world after the lackluster response to Paul’s rematch against Tyron Woodley. As for Silva, he is coming off a vicious KO win over Tito Ortiz.

Jake Paul vs Anderson Silva fight card: Who is fighting on the undercard?

For boxing fans in the US, Paul vs Silva can be purchased from Showtime PPV for $59.99. Meanwhile, for British boxing fans, the fight will be available on Fite TV in Britain and is listed at £17.99.

What time is Paul vs Silva live?

In the US:  Jake Paul vs Anderson Silva will be live at 9 p.m. ET. However, it will be a while before we see the main event between both the boxers. The expected ring walk time for the main event will be right around 11:30 p.m. ET.

In the UK: British boxing fans can watch the fight live at 2:00 a.m. BST. Paul vs Silva will stream on the next day because of the time difference between both countries.

In Brazil: Boxing fans in Brazil who will be eagerly waiting for Anderson Silva to step inside the boxing ring against Jake Paul can witness the fight live at 10 p.m. BRT.

Who do you think gets his hand raised this weekend when MMA legend Anderson Silva and rising sensation Jake Paul steps inside the boxing ring? Do let us know in the comments section.