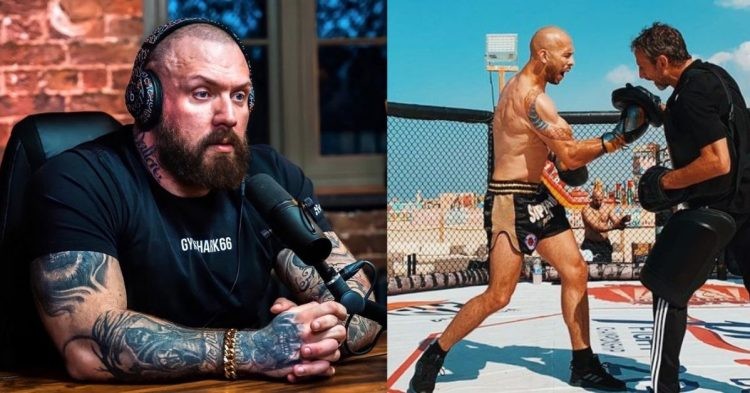 Controversial social media star Andrew Tate is one of the most famous people on the internet currently. He went viral for his misogynistic views and “Toxic Masculinity” statements. Tate is banned from all social media platforms including Tiktok, Instagram, and Twitter.

‘Cobra’ is a former three-time kickboxer and he often calls out people he dislikes. Tate has called out Logan Paul and Jake Paul on multiple occasions. Other than the Paul brothers, Tate would love the idea of fighting UK YouTuber True Geordie, but for personal beef. In a recent interview, Tate said:

“For me to fight – it would have to be personal beef. And the reason is because I can’t get motivated by money because I have more than anybody would possibly believe.

So True Geordie is some person I’ll smash up any day of the week for free. He’s a fat f**k.”

According to Tate, Geordie “is into some Haram sh**” and is “a coward.” Geordie and Tate have been running back and forth on social media and calling each other out for quite some time now.

However, things escalated recently when Geordie made a racist joke about Tate and his religion. The internet soon picked up his comments and soon went viral. This soon enraged Tate to the point where the former kickboxer sent a warning to Geordie saying he will have to face consequences for his actions soon.

After the controversy, True Geordie issued an apology to Andrew Tate, but many thought it was not genuine and mainly out the fear of getting canceled. Following the controversy, Tate sent a message to Geordie saying:

“To insult my religion, and the religion of billions of people across the f**king planet, making ignorant jokes about blowing ourselves up, thinking it’s gonna go without consequence, you’re gonna learn very quickly my friend that was a mistake.”

It all began when Geordie made on Tate and said that Tate should “blow himself up.” Geordie faced backlash very soon and was branded an Islamophobe. Things escalated to a point when Gymshark, the fitness brand recently stated that they have cut ties with Geordie regarding the racist remarks.

It seems that Geordie is already facing the “consequences” and it is expected that more brands are most likely to cut ties with the UK YouTuber. Geordie’s apology did little to undo the damage and it looks like he is also on the verge of getting canceled.