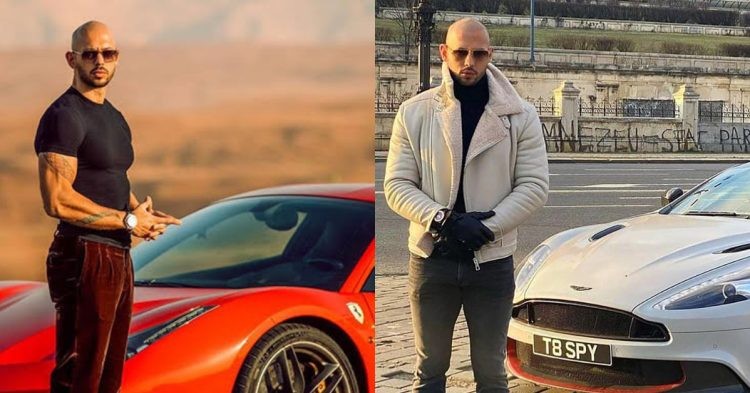 Andrew Tate reveals that he does not own his supercars. (Credits: YouTube)

Controversial social media influencer, Andrew Tate is a man the whole world has heard of in one way or another. As such, following his monumental rise to fame, there were many people that wanted to know more about him. Thus, we saw the ‘Top G’ making his appearance on a number of different podcasts.

Speaking on a podcast with STRIKE IT BIG, Tate talks about a variety of topics. Most notably, Tate reveals that despite his wealth, he does not own anything.

Initially, fans may have found this statement a little puzzling, considering that Tate has openly admitted to having 33 cars. Moreover, he is incredibly proud of his Bugatti Chiron Pur Sport, of which he owns #18 out of only 60 worldwide. Previously, Tate has been accused of not owning any of his supercars, with people claiming that he is ‘only putting on a show.‘

At the time, Tate revealed that supercars cannot be rented in Romania and if they are, they cannot have customized plates as his cars do. Thus, it only makes sense that he does in fact own them. However, many wonder that if he does own them, why was he denying so?

As Tate further explains, the more a person owns and the more wealth they have, the more attention they draw to themselves. Thus, Andrew believes that it is better to simply rent things, rather than own them.

Why did the police seize Andrew Tate’s cars?

Recently, Andrew, along with his brother Tristan and two other female accomplices were detained in Romania. Following their initial arrest, they have been further detained for 30 days, till investigations continue. Further, it has also been revealed that police have seized 11 of Tate’s supercars from his villa, including his $5.2 million Bugatti.

🚨Andrew Tate's supercars will be seized by Romanian police this week

This is not unexpected. The court will determine whether those cars were acquired through money generated by the purported crimes.

If found innocent, the 11 cars will be returned back to Tate. pic.twitter.com/JJlBx6T6PR

Due to the Tate brothers having a lot of connections, influence, and wealth, the judge has denied their appeal seeking a release in order to ensure a proper investigation. Moreover, it is also being checked whether Tate’s Bugatti was legally acquired or not.

Currently, Tate is still in detention and will be staying there for the entirety of his sentence. As such, if the investigations reveal admissible evidence, Tate’s detention could be extended up to 180 days.

Moreover, if he is indeed guilty, Tate will reportedly be sentenced to 15-20 years. Although there is no major update on the case, the investigations are still ongoing. Thus, fans of the Top G will be praying for his immediate release and for his cars to be returned to him.

Do you believe that Andrew Tate owns all his cars? What do you make of his reasons for denying it? Will he ever get his cars back? Leave your thoughts in the comments below.