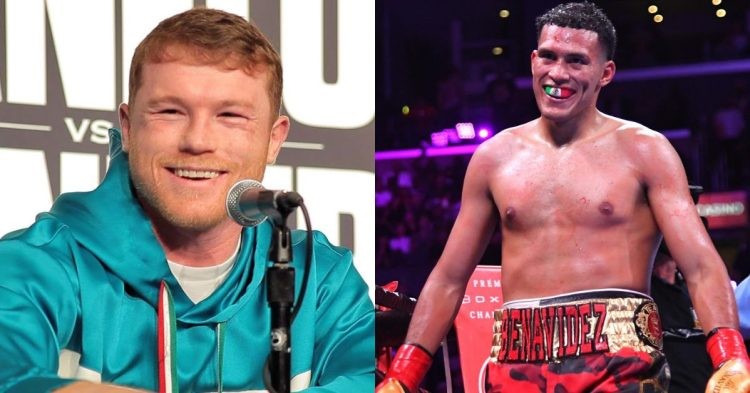 Canelo Alvarez stepped inside the ring to take on his rival Gennadiy Golovkin in a trilogy bout scheduled for twelve rounds at the sold-out T-Mobile Arena in Las Vegas. The Mexican boxer shut all his doubters as he completely outclassed GGG throughout the twelve rounds and retained his undisputed super middleweight title.

In the post-fight interview, Alvarez revealed that he will take some rest after suffering an injury to his hand and confirmed that he would move up to light heavyweight division next.

Following his unanimous decision win over Golovkin, Saul sat down for a post-fight press conference where he shared his thoughts about the matchup and spoke about his future plans.

During this press conference, Canelo was questioned whether he is open to fighting David Benavidez at 168 or if he is against fighting him due to his stance of not fighting Mexicans. The undisputed champion was unhappy with how the media outlets mistook his comments and revealed that he is open to facing any fighter.

“I don’t know anything can happen. Guys always I say this you short the video and put wherever you want. When I say I don’t want to fight a Mexican because I represent Mexico that’s why. But I don’t care I fight anybody and my entire life anybody.”

After clarifying that he is open to fighting any challenger put across him , Canelo Alvarez blasted David Benavidez’s father for talking trash on social media. Not only did he slam David’s father but he also took a dig at Benavidez and claimed that he has not achieved anything in boxing.

“What do you think I don’t wanna fight one Mexican, Benavidez? Look I hear his dad talking a lot of s**t. But look what he’s accomplished, nothing. One single champion Anthony Direll. Please on the respect of myself.”

It is clear that Canelo doesn’t look at Benavidez as a real challenge and has his eyes set on the light heavyweight title fight as his next conquest. Do let us know in the comments section below who you think Saul Alvarez will face next after he recovers from his hand injury.