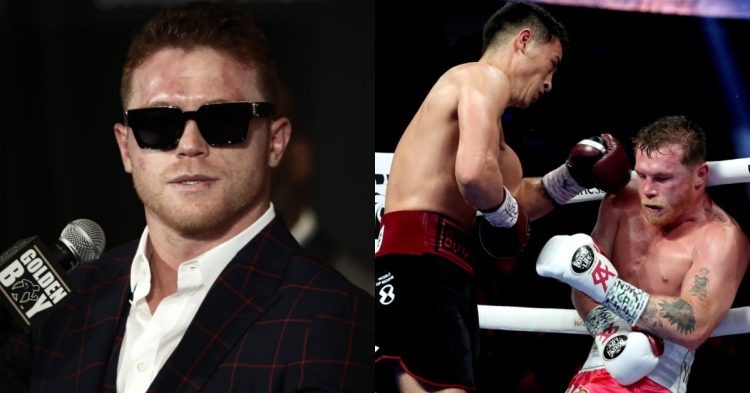 On May 7th of 2022, Canelo Alvarez tried to make history against Dmitry Bivol. After ruling over the middleweight fighters, Alvarez challenged WBA (super) light heavyweight champion Bivol for his belt inside the T-Mobile Arena in Las Vegas.

Ahead of the fight, there were rumours that Canelo would even be open to fighting Oleksandr Usyk in a cruiserweight bout. However, fans soon got a reality check against Dmitry that some dreams are not just not attainable. Although Bivol did not get a stoppage over the Mexican, he dominated large portions of the fight.

Canelo. who is known for his smooth footwork inside the ring and amazing head movement, looked slow and stiff against a much bigger opponent. It looks like the move to light heavyweight was a step too far for Alvarez who could not keep up his usual pace because of the extra weight.

In a recent interview with GQ Sports to promote his upcoming fight against GGG, Alvarez finally opened up on what went wrong against Bivol.

“No, the truth is that there is not much to say. I lost the fight because I got tired. It was definitely that, the weight, a lot of things that happened. At the end of the day I lost, and that’s how you have to take it.”

There is unfinished business between Saul ‘Canelo’ Alvarez and Gennady Golovkin. They previously crossed paths in 2017 and 2018. In the first fight, GGG outlanded and outworked the Mexican champ. However, only one judge scored the bout in favour of Golovkin. Judge Dave Moretti had it 115-113 for GGG, Don Trella scored the bout to be a draw (114-114).

But the other judge, Adelaide Byrd scored the fight in favour of Canelo, 118-110. So the bout was ruled a draw. Canelo walked away with a win in the rematch by a majority decision. For the rematch, judges Dave Moretti and Steve Weisfeld had it 115-113 for Canelo while the other judge, Glenn Fieldman had it 114-114.

Needless to say, GGG did not agree with either result. Hence, it will be a prime opportunity for him to avenge his two losses against Canelo on September 17th in Las Vegas once again. While Canelo is coming off the aforementioned loss against Dmitry Bivol, Golovkin has remained unbeaten since the last loss to Canelo almost 4 years ago.

So it will be interesting to see which way the fight goes. Canelo is not the same point fighter that he was during their first two fights. He has evolved into a more aggressive power puncher. On the other hand, GGG has definitely slowed down quite a bit. So a stoppage win for Canelo is not out of the play.

Who do you think wins between Canelo Alvarez and GGG in the trilogy fight? Do you think Canelo will maintain his dominance? Or GGG will finally get the upper hand? Let us know in the comments down below.

Khabib Nurmagomedov Predicts Bizarre Ending to UFC 280, Says Charles Oliveira Will Not Even Fight for the Title in Abu Dhabi