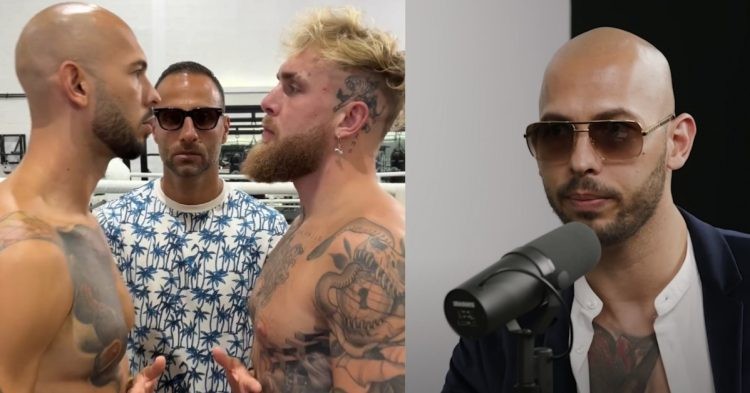 After spending quite some time outside the ring, it looks like the former kickboxer Andrew Tate is set to come out of his retirement. Jake Paul broke the internet recently as he teased a potential bout against Tate in the near future.

Although he did not get into the details, in an Instagram story, Jake confirmed that negotiations are going on for the fight. He also added that the bout is being targeted for 2023.

However, this is not the first time they are linked for a fight. In August, Jake had two fights fall out, as both Tommy Fury and Hasim Rahman Jr canceled their scheduled bouts. As Jake was struggling to find opponents, rumors started flowing that Paul is in talks with Andrew Tate for a fight. Even Tate spoke about it and noted his interest in the bout. He also predicted how the contest would go!

“When I made the video, I really disliked Jake Paul. Now I don’t dislike him, I understand him. I wanna make something clear. I would still kick the living f**k out of Jake Paul. I’m not some washed-up UFC fighter. I’m not smaller than him. I would beat the living s**t out of him and if he wants to fight, I’ll fight him any day of the week and I’ll wreck him and he knows that.” (h/t via TateLectures)

But, Jake then confirmed that he would fight former UFC middleweight champ, Anderson Silva. The Problem Child beat Anderson in October with an impressive performance. After the bout, Jake called out former UFC fighter Nate Diaz and even Canelo Alvarez. However, it looks like the 25-year-old is going in a different direction and wants to face Andrew Tate next!

Andrew Tate was an elite kickboxer in his prime years. Tate has a professional kickboxing record of 76-9 and has four titles at his disposal. Tate has great knockout power and his movements are pleasing to the eye. Hence, it is understandable that he is confident heading into a bout against Jake Paul. As Tate mentioned himself, Jake does not have any physical advantages over him.

As fans saw in the face-off video, Tate is taller than Paul. But not only his height, but Cobra also has a much bigger physical frame than Jake as well. Hence, the potential match-up between them will possibly be the toughest challenge of Paul’s career yet! However, just because he is confident, it does not mean that Andrew is dismissing Jake’s abilities as a fighter and a promoter.

“However, I do understand what he’s doing. I understand that he’s very very smart even with his marketing angle. ‘I’m just a YouTuber.’ You’re not just a YouTuber. You’re a full-grown man with the best coaches in the world who’s dedicated his life to learning how to box for years. You know how to box. You’re not a complete amateur. You know how to box very well. Three, four, five years of training combat sports, you can box. The guy is not a jackass.”

As previously mentioned, Jake Paul is coming off a massive win over the legendary Anderson Silva. With the win, Jake improved his professional boxing record to 6-0. In his young career, Jake beat two former UFC champs and one Bellator champ. So Andrew is not wrong about his assessment of Jake’s fighting skills. Paul seems to have shifted his full attention toward building a credible fighting career.

Do you think Andrew Tate’s predictions of him dominating Jake Paul will come true? If not, how do you think the bout goes? Let us know in the comments down below.