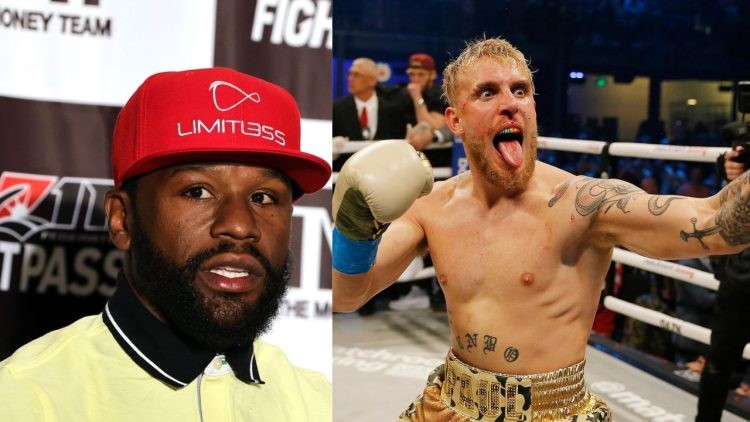 Floyd Mayweather has enjoyed a good time following his retirement from boxing. With Mayweather now 45, he has only taken on exhibition fights since retiring. As such, he has a pretty good knowledge of people in the influencer boxing scene.

When it comes to influencer boxing, surely there is no bigger name than Jake Paul. The Ohio native has made waves since stepping into the ring and dispatching some big names. However, ‘Money’ believes that Paul only looks good due to his opponent’s inexperience.

Floyd Mayweather on Jake Paul: "As long as he continues to fight MMA guys and YouTubers, he's gonna continue to look good and shine, but once he fights a real fighter it's not gonna be good. He'd get f***ed up by Canelo. There is no way. He'd get demolished." [@TMZ_Sports]

“Jake Paul, as of right now, for what he’s doing, it’s good for what he’s doing,” Mayweather says while speaking to TMZ. “But once he fights a real actual real fighter, it’s gonna be bad. But one thing I like about him: He’s selling it and he’s making good money. He’s entertaining. I like it.”

“As long as he continues to fight MMA guys and YouTubers, he’s gonna continue to look good and shine. But once he fight a real fighter, a real fighter that can really fight, it’s not gonna be that good. He’d get f***ed up by Canelo. There is no way. He’d get demolished.”

Notably, Mayweather mentions Canelo, one of the best boxers in the history of the sport. Having faced some of the fiercest boxers on the planet and also the influencers, Mayweather‘s opinion is more credible than most.

What Is Next For Floyd Mayweather?

With a rematch super fight against Conor McGregor off the table, it leaves room for a new opportunity. Currently, will fight Japanese MMA fighter Mikuru Asakura in Saitama this weekend. Also on the horizon is Floyd’s bout against British YouTuber and KSI’s younger brother, Deji in November.

However, with Jake Paul also fighting Anderson Silva around the same time, there is a possibility of a Jake-Floyd matchup next year. Moreover, the two have history together after Jake stole Mayweather’s cap during a press conference for Floyd vs Logan Paul.

Although the bout vs. Logan was an exhibition one, Jake will most definitely want a potential bout to be on the official record. Could this fight be a real possibility come next year? Watch this space.