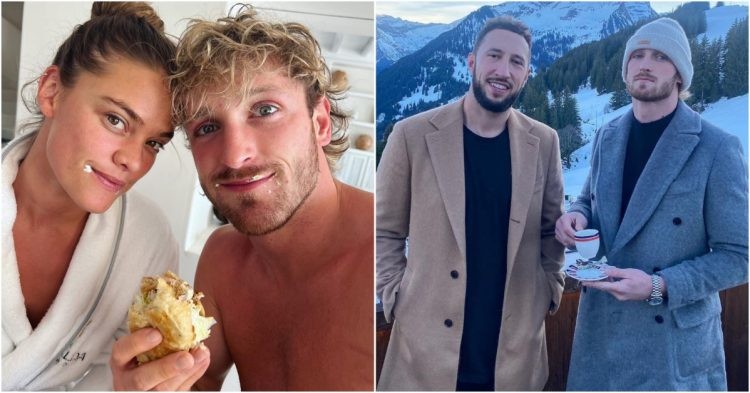 The latest episode of the “IMPAULSIVE” podcast by Logan Paul came with a lot of answers. The two most notable ones were his response to the CryptoZoo scam allegations and the cause of a behind-the-scenes scuffle with his co-host Mike Majlak.

In what he feels were the toughest 3 weeks of his life, Logan reveals everything that he has been up to. As Logan recalls, he got food and alcohol poisoning, had his $20,000 camera taken away at the airport in Qatar, the Coffeezilla exposé, and had a fight with best friend and co-host Mike Majlak in Denmark. At the crux of the fight, was Logan’s new girlfriend Nina Agdal.

After Mike reminds him, Logan goes on to explain the whole ordeal in detail. “Me and Mike got in a massive fight. I got in his face because Nina put her finger, she’s a pointer, and she put her finger on Mike’s face.” Mike, at the time, responded, “Get your finger out of my face!”

Instinctually, the WWE star also said, “I’ll smack the f**k outta you, that’s my girl!” and then followed it up with, “Now my finger is in your face what are you gonna do about it?”

At this point, Mike reveals that he simply walked away from the situation. Looking back on the situation, Mike concludes, “….it was a representation of how horrible things had gotten,” in reference to the last few weeks. According to Logan, he “defamed Jesus and God” and as a result, felt “His wrath”.

Have Logan Paul and Mike Majlak fought before?

With the recent events coming to light, one can only wonder if YouTuber-turned-boxer and Mike have had similar encounters before. Simply put, the answer is yes, Mike and Logan have indeed gotten into ‘beef’ before.

INSTANT REGRET: Mike Majlak responds to Logan Paul calling him out, then deletes it. Mike says “i made a tasteless comment,” adding “Logan and i are handling this behind the scenes.” This after Logan claimed he’d caught Mike telling numerous lies in the past. pic.twitter.com/OgY3VvhTCD

In 2021, Mike Majlak appeared in an episode of “Mom’s Basement,” hosted by Ricky “FaZe” Banks and Daniel “Keemstar” Keem. In a segment, Mike Majlak commented on Logan’s stance regarding Harry Styles wearing a dress and accused him of “d**kriding”.  Then, Logan publicly called out Mike for his comments which the latter quickly took back.

Eventually, things worked out between the pair and even now they are able to work past their problems with ease. The pair are back to being best friends and will be looking to continue their friendship for the foreseeable future.