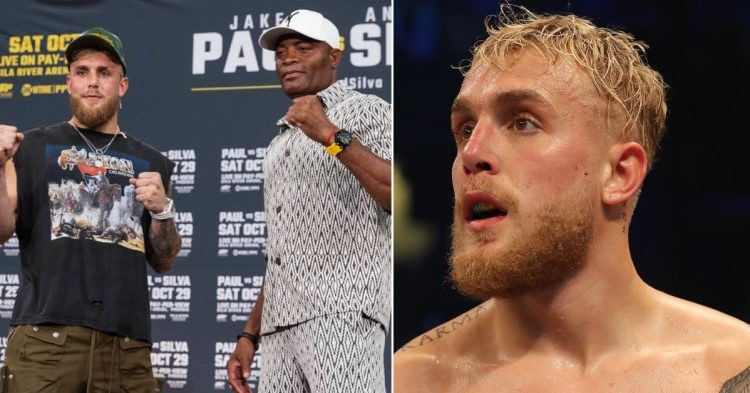 Jake Paul vs Anderson Silva goes down this weekend on October 29, inside Desert Diamond Arena in Glendale, Arizona. This will be the third time that YouTuber turned professional boxer Jake Paul, will take on a former UFC fighter inside the boxing ring.

Taking on someone of the stature of Anderson Silva certainly calls for some excitement. However, that is not the case. Earlier, it was reported that the ticket sales for Paul vs Silva have been extremely low, and now, it doesn’t even look like the PPV numbers are doing that great either.

The UK price for Jake Paul vs Anderson Silva is listed at £17.99. Needless to say, it is bound to change depending on the pre-sales. Meanwhile, check out some reactions here from British boxing fans, reacting to the PPV price for Paul vs Silva.

I’ll watch the next day online for absolutely nothing

I don’t get it why is Paul always ppv he’s not that good!

I’ll steal it and stream it for free

Are they paying you that to watch ?

Boxing is a circus these days

Nope. Would watch for free but not PPV.

Ever since Jake Paul made his professional boxing debut, he has only received backlash from boxing fans. While some have argued his inability to box “real fighters”, others have criticized him for fixing fights right from the start.

Many fans believe that there’s a huge chance that Jake Paul’s upcoming boxing bout against Anderson Silva could be fixed. Fans had earlier opined how Jake Paul’s fight with Tyron Woodley was fixed and had a “no knockout” clause attached to it.

@jakepaul is single handedly ruining #boxing worse than when @FloydMayweather comes out of retirement for the 100th time. Hes not a boxer and hes stealing money on fixed #noknockoutclause fights. Hes a clown.

Can tell this fight is gonna be fixed

The interest of the audience in Jake Paul can be seen from the declining viewership and PPV sales of Paul’s fights which have been on a downward spiral ever since he made his boxing debut.

While Jake Paul vs Tyron Woodley did over 500,000 PPV buys according to reports, while the rematch did a meager 60,000 PPV buys. It will be interesting to see how much Paul vs Silva will do this weekend. Rest assured, the numbers are not going to be exceptional looking at the recent trends and the public opinion on social media less than a week away from the fight.