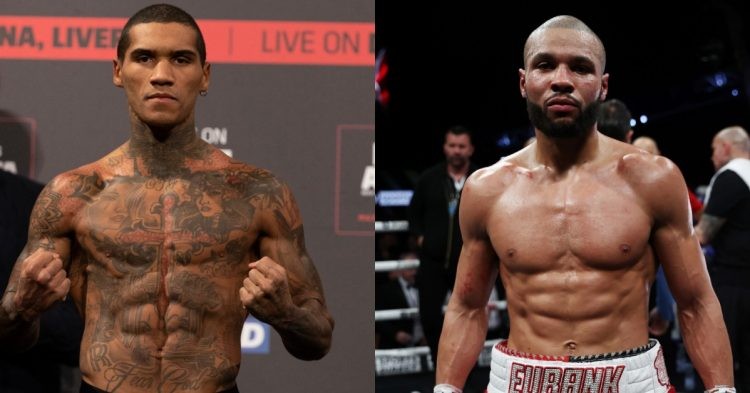 Chris Eubank Jr will have to wait a bit longer to fight Conor Benn. The two were scheduled to face each other on October 8th. However, that fight has now been cancelled after the positive drug testing for Conor Benn. Matchroom Boxing has confirmed that the fight will no longer go ahead as planned.

But the news of the cancellation comes after a lot of effort from the promoters to keep the fight on schedule. Eddie Hearn, the promoter of Benn, stated previously that he would even take the help of the law if needed. However, it looks like the efforts from the promoters have gone in vain.

The British Boxing Board of Control issued a statement where they stated the fight was “not in the interest of boxing.” However, in their statement regarding the cancellation, Matchroom slammed the verdict and stated the decision was not favourable to the fighters. There are internal investigations going on at the moment and the fans who bought the tickets can collect their refund.

Conor Benn tested positive for clomiphene which is a testosterone booster. Although many expected it to be a non-issue, it looks like the positive drug test ultimately proved to be a hurdle too much to overcome.

Conor Benn comments on the cancellation of his fight against Chris Eubank Jr.

The fight between Conor Benn and Chris Eunbank Jr was not just any other contest. Their fathers, Chris Eubank Sr and Nigel Benn had two glorious fights in 1990 and 1993. While Eubank won the first one, the second was a split-decision draw. Both fights did amazing business in the UK as both fighters are British and they became pop-culture icons.

Hence, the bout between their sons would have been a huge event on UK soil. Hence it is no wonder that both the fans and promoters. In a press conference held after the news, Eddie Hearn spoke about the incident.

“We were looking forward to an event that has really captured the imagination of the British public. A fight that had so much history. Myself and Kalle (Sauerland) and Wasserman boxing so excited for. But obviously, we wanted to come here today and formally announce that Chris Eubank Jr against Conor Benn has been officially postponed.”

The fighter because of whom the entire event has been delayed, Conor Benn, has also issued a statement to express his disappointment about the cancellation.

The fight was set to take place at a catchweight of 157lbs. It was set to go down inside the O2 Arena in London. Although there is no official word on whether there will be an attempt to book the fight for a later date, it looks like the most likely next course for all the parties involved.