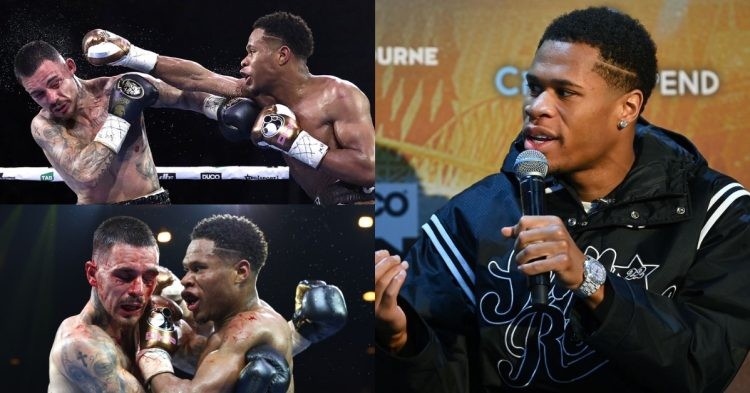 Undisputed lightweight champion Devin Haney stepped inside the ring to defend his titles against George Kambosos Jr in a highly awaited rematch that took place at the Rod Laver Arena in Melbourne Australia.

This was The Dream’s first title defense after defeating the Aussie lightweight via unanimous decision in their first meeting in June earlier this year. It is needless to say that Kambosos Jr was aiming for revenge after he suffered his first pro boxing defeat to Devin.

However, Devin Haney proved to be too tough to handle for George Kambosos Jr as the undisputed champion successfully defended his titles via unanimous decision.

Unlike the first fight where Devin Haney disrupted Kambosos’ rhythm by clinching, this time around the Aussie boxer switched stances and attacked the champion. Ferocious was looking much better than their first matchup as he successfully evaded The Dream’s jabs and landed some good strikes in the first round.

However, Devin found his rhythm back in the second round and started controlling the pace of the fight. He threw some good combinations and significantly out landed George. As the fight progressed Haney became extremely dominant and started landing punches at will.

The Dream’s set-up with his jabs was the key factor in the rematch as well after he inflicted serious damage in the ninth and tenth rounds of the fight. In the championship rounds, Devin stayed on the defensive and didn’t overextend and went on to retain his belts.

What’s next for Devin Haney after his win over George Kambosos Jr?

Devin Haney defended his undisputed titles in a much more dominant fashion in the rematch against George Kambosos Jr as two of the judges scored the contest 118-110 and one judge scored the bout 119-109 in favour of The Dream.

The 23-year-old lightweight champion never looked in trouble throughout the twelve rounds and showed the entire world why he is one of the best boxers in the division. After successfully defending his belts, the interviewer asked Haney who he would like to face next.

The Dream looks high on confidence as he rightly should after defeating a tough opponent like Kambosos for the second time. With Gervonta and Ryan Garcia rumoured to face each other, Vasyl Lomachenko would most likely challenge Haney for the undisputed titles.

It would be interesting to see whether Devin manages to tackle Loma’s threat or will the undisputed champion become prey to the Ukrainian’s power.