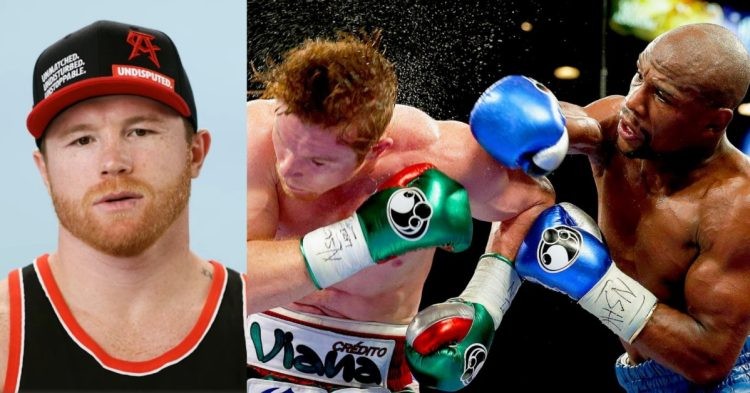 Canelo Alvarez will fight Gennady Golovkin this weekend at T-Mobile Arena, Las Vegas. After their previous two encounters, the anticipation for the trilogy fight is unreal! While the first fight was a draw, Canelo won a second fight via majority decision. After 4 long years, the boxing fans will finally get to revisit the rivalry.

Recently, Saul ‘Canelo’ Alvarez appeared on GQ Sports to promote the fight. During that, he spoke on many topics, including his loss to Dmitry Bivol in his last fight. He was also asked a question that fans have wondered for a long time, ‘Who wins in a fight between a prime Canelo and a prime Floyd Mayweather?’ The 32-year-old had a really interesting answer to that.

As fans remember, Canelo fought Floyd inside the MGM Grand Arena in 2013. Mayweather won the bout via majority decision. But, the fight took place almost 10 years ago and Canelo was barely 22 at the time. Floyd, on the other hand, was in his absolute prime. So a lot of fans thought that the result would have been much different if both fighters were close to, or, in their prime and Canelo is one of them.

“I think it is difficult to say if in our prime he could beat me or I could beat him, because that’s never going to happen. But I am sure that in my prime, he would never beat me.”

What really happened when Canelo Alvarez fought Floyd Mayweather in 2013?

On September 14th of 2013, a young Canelo Alvarez took on Floyd Mayweather. At the time of the fight, Floyd was a 36-year-old veteran who had achieved everything in the sport. On the other hand, Canelo was just getting started at the highest level of the sport. So the eyes of the whole combat sports world were on this fight and Floyd delivered.

Money Mayweather’s defence was stern and Canelo could not do anything to get past it. Despite not over-extending himself, Floyd managed to outland Alvarez. His flow, on the night, was unreal and the Mexican could not figure out how to string together any meaningful combos. In total, Mayweather attempted 505 strikes and landed 232.

In stark contrast, Canelo Alvarez only landed 117 punches despite attempting 526 punches himself. It just proves how elusive Floyd Mayweather was on this particular occasion. From Floyd’s calculated offence to his world-class defence, he schooled the young fighter. To some extent, the loss was a big catalyst behind Canelo becoming a more complete boxer.

But the night ended in controversy as one judge had the bout 114-114, while the other two had it 116-112 and 117-111 respectively for Floyd. The judge who scored the the fight 114-114 was named CJ Ross and fans were outraged at her. There were calls for her to be investigated as her scorecard was outrageous!

So how do you think a fight between a prime Floyd Mayweather and a prime Canelo Alvarez would have gone? Let us know your thoughts on the matter in the comments down below.