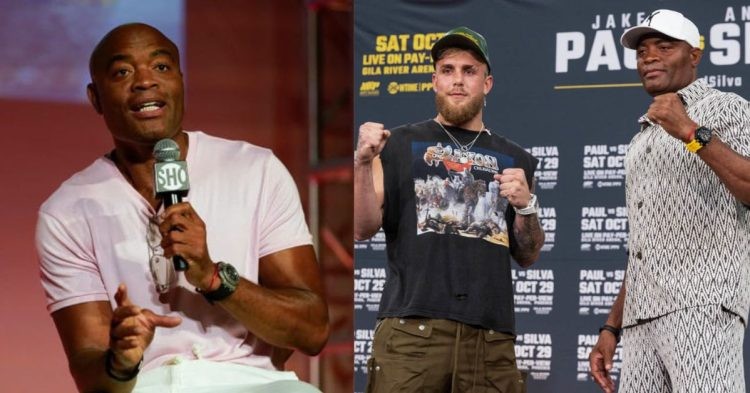 Former UFC champion Anderson Silva will get back in action this weekend on October 29th as he takes on Jake Paul in a boxing match. This eight-round main event bout will be contested at a catchweight of 187-pounds and will take place at the Desert Diamond Arena in Glendale Arizona.

BREAKING NEWS🔴
Jake Paul VS Anderson Silva in Jeopardy – Silva is currently being investigated by the commission after he claimed he had been knocked out twice in sparring😲 pic.twitter.com/QHXgAQIPz8

Ahead of this big fight, Silva sat down for an interview with MMA weekly. While having a conversation, the Brazilian fighter shared details about his training camp. Anderson Silva said that he had a tough camp and two of his sparring partners knocked him out during the workouts.

The Spider’s comments came as a surprise as getting knocked out twice ahead of the fight is concerning. Consequently, there were doubts about whether this fight would take place after his statement.

However, Anderson has given clarification on his recent comments and said that he only suffered a knockdown and the interview with MMA Weekly took place back in September.

“After seeing the reports and concern for me, I’d like to clarify two important things. One, I was never knocked out in sparring. I misspoke in that interview as I sometimes do when interviewing in English and exaggerated the normal back-and-forth action that occurs in sparring.”

“More importantly, my training camp has been great. I am fit and ready to fight and the only knockout people should be worried about is the one I’m about to deliver to Jake Paul on Saturday night.”

Anderson Silva is extremely confident that he will knock out Jake Paul in his upcoming eight-round boxing bout. Going into this matchup, the former UFC champion is a favorite and fans are expecting him to hand The Problem Child his first professional loss.

The 47-year-old has all the tools to outclass Jake. However, there is a big concern regarding his durability. Owing to the fact that Silva suffered two successive knockout losses in his last two fights in the UFC.

In his last boxing bout against Tito Ortiz, Anderson Silva showed that he is still very agile and can knock out any opponent. So the key for Anderson will be to be careful of Jake’s knockout power and take the fight to the distance. Because he has the speed and striking output to trouble Jake and put him on the back foot.

Do let us know in the comments section who you think will win the upcoming main event bout between Jake Paul and Anderson Silva.