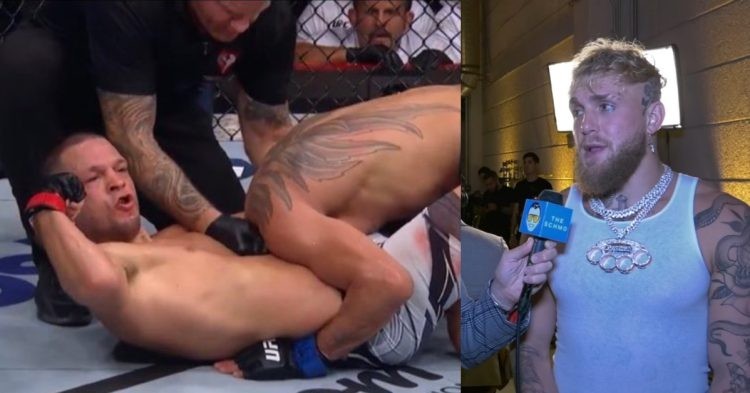 Nate Diaz defeated Tony Ferguson in the main event of UFC 279 via guillotine choke. Not only was the win significant as it was against a fellow veteran fighter, but is also very important as it was the last fight in his UFC career. He displayed great character inside the Octagon and entertained the fans. It was so impressive that even Jake Paul praised him.

Jake Paul is set to fight Anderson Silva in the boxing ring in October. The bout against Silva promises to be the first legit challenge of his career. So Jake definitely has his hands full come October 29th. However, Jake took some time off to catch Nate’s last fight in the UFC. During a recent interview with The Schmo, he was asked to rate Nate’s performance at the PPV.

Jake Paul had nothing but positive things to say about the 37-year-old.

“10 out of 10 man. He was entertaining, he was fun, he had great striking and then he finished with a submission. It was damn near flawless and it just sets up a massive fight hopefully for us one day. But for now, October 29th, Anderson Silva.”

As revealed before the fight, Nate Diaz had only one fight left on his contract. Hence the prospect of him fighting Khamzat Chimaev was horrible for Nate’s stock. In all probability, Chimaev would have beaten Nate in a very dominant way and it would have damaged Nate’s star power heading into free agency. So the last-minute change of opponent actually worked out in Diaz’s favour.

Nate started off slow, but he took over control of the fight as it went on. In true Nate Diaz fashion, his striking became more and more polished with time and it ultimately made El Cucuy fall apart in front of the pressure. Nate then submitted Tony at the 2:09 minute mark of the 4th round.

After the bout, Diaz stated that he wants to make a play for another form of combat sports. Although he did not explicitly name boxing as the sport he want to fight in, it was very clear what he was hinting towards. It made Jake Paul jump on Twitter and express his desire to fight Nate Diaz in the ring.

“Nate Diaz, you want into the sport of boxing. I wonder, maybe we should fight.”

Jake Paul will have a very tough fight against the former UFC middleweight champ Anderson Silva. But The Problem Child is very confident that he can knock out the Spider. If Paul does manage to accomplish it, there is no doubt that Paul vs Diaz would make for an amazing spectacle.

If the fight does come to fruition, who do you favour to win? Do you think Jake Paul has a chance of beating Nate? Or does Nate Diaz absolutely school the 25-year-old YouTuber? Let us know in the comments down below.