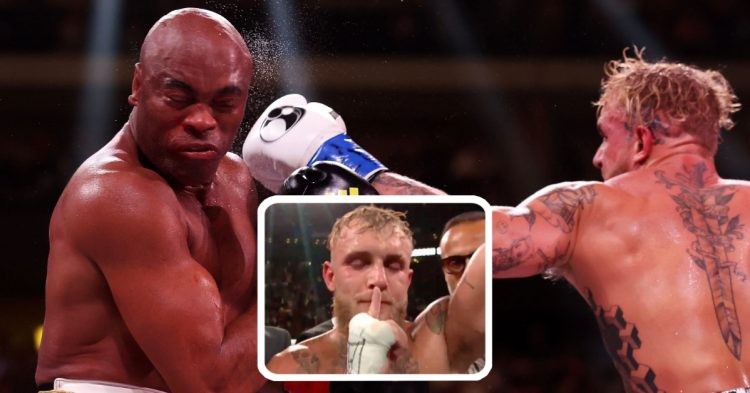 The much-anticipated Anderson Silva vs Jake Paul bout is finally here! Paul wanted to test himself against one of the best combat sports athletes of all time. Silva was by far the most decorated striker that Paul had faced. So how did Jake do against the former UFC middleweight champion? Let’s find out.

Anderson Silva did not start in an aggressive fashion. Jake has his fair share of knockouts in his career. So Silva respected Jake’s power and wanted to see what Jake had. But Jake landed some good punches on Silva. Although he did not land anything spectacular, Jake stayed busy in the bout.

At one point, Paul landed a headbutt which bloodied the 47-year-old. But none of his punches rocked the veteran fighter. After a few slow rounds, Jake started landing some combos which was a new addition to his arsenal. In the 6th round, Jake went low with two punches and then landed a big hook to finish a pretty decent combo.

Silva controlled the ring pretty much all throughout the fight. But he did not land a lot of punches. Whenever Silva tried to land big punches, Jake very intelligently engaged in a clinch and forced a separation. The biggest moment of the bout till that point came in the final round when Jake landed a stiff jab which knocked down Anderson.

Silva knew that he needed a stoppage in the last round to secure a win. But Paul was masterful with his movement inside the ring. He was never in Silva’s range and always kept The Spider on his toes. Despite Anderson Silva trying to finish Jake in the last round, Jake survived and finished the bout with his head held high. During the bout, the broadcast team suggested Jake was ahead in the unofficial scorecards.

This was undoubtedly the biggest and the best win of his short career. A lot of fans suspected that Silva would school Jake in the ring. But, Jake once again proves that he is a fast learner and is willing to put the work in to get better. After the bout, Jake called out Nate Diaz and Canelo Alvarez.

“I want Nate Diaz who is a b*tch. He tried to come into my locker room, he tried to cause some sh*t and then he always leaves the f***ing arena. So Nate Diaz, stop being a b*tch and fight me. And Canelo, you too! You too Canelo. You guys said, ‘oh you can’t beat someone, you can’t beat a striker, you can’t beat a legend like Anderson Silva.’ I just did it. So why can’t I beat Canelo? F**k y’all.”

Ahead of the main event fight, there was a brawl between Jake’s team and Nate Diaz. In a video, Nate was also seen slapping someone in the arena. So it looks like Jake Paul vs Nate Diaz will probably be the next fight.