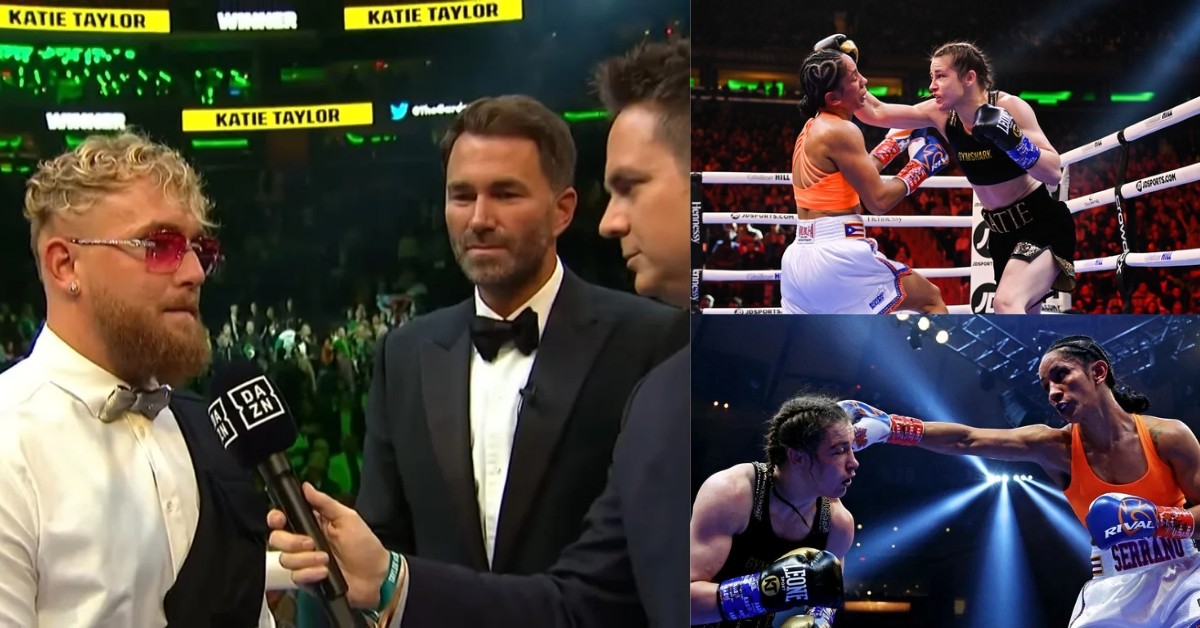 Katie Taylor took on Amanda Serrano on what was a historic night at the Madison Square Garden. The atmosphere at this iconic arena was electric as these two female lightweights traded blows and engaged in a violent ten-round war.

With both fighters not being able to find the finish after the end of ten rounds, the outcome of the bout was dependent on the judges’ scorecard. One judge scored the fight 96-94 in favour of Amanda Serrano. Meanwhile, two judges scored the bout 93-96 and 93-97 in favour of Katie Taylor.

Consequently, Taylor successfully defended her undisputed lightweight titles against Serrano in what was unarguably one of the best fights in the history of the sport. Following this spectacle, both Eddie Hearn and Jake Paul who were the promoters of Katie and Amanda shared their thoughts about this fight in an interview.

Eddie was extremely happy about the fight played out and he went on to praise the Irish boxer for her heart and tremendous character. He also confirmed that Taylor and Serrano should fight again later this year.

“I felt it was a close fight, I know this man will want to run it back. I see a big rematch later in the year but for now Katie Taylor a legend in the sport of boxing.”

Whereas Jake was unhappy with the result as he believed Amanda should have won the fight. He also went against the judges’ scorecard and agreed with Eddie that the two lightweights should run it back and gave an estimated timeline.

“You gotta give credit where credit is due. And let’s run it back like Eddie said September, October, this fight, this second fight got a whole lot bigger,” said Jake.

Following Katie Taylor’s amazing win over Amanda Serrano at the Madison Square Garden, Eddie Hearn reacted to this historic fight and expressed his joy in the interview backstage. Later in the conversation, the interviewer inquired the British promoter about how likely is a rematch between Taylor and Serrano.

“I think everybody’s gonna wanna see that fight again. Everyone’s gonna want to see it and just so pleased for Katie.”

Thereafter the interviewer asked Hearn if not Amanda Serrano then who would be the next opponent for Katie Taylor. To which the British promoter responded by saying that both these lightweights need each other.

It is needless to say that a rematch between these two legends would be even better and bigger as their first match was something special.

Amanda Serrano vs Katie Taylor Scorecard and Punching Stats: Was Serrano vs Taylor a Robbery?