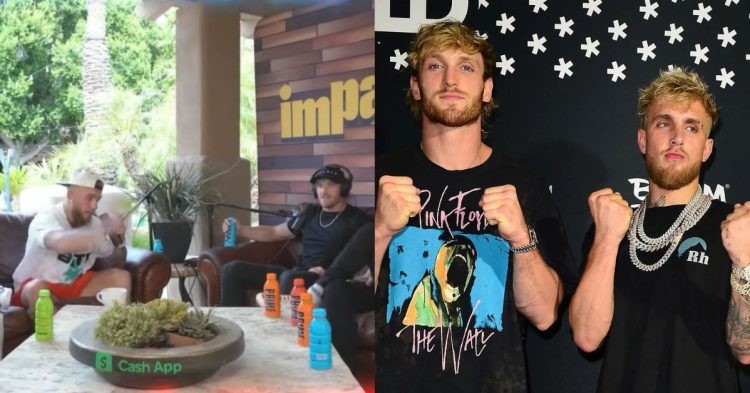 Jake Paul gets into an altercation with Logan Paul (Credit: Twitter)

Famous influencer-turned-boxers Jake Paul and Logan Paul had gained a lot of stardom since starting professional boxing. The undefeated fighter Jake is coming off a huge win over UFC legend Anderson Silva.

On the other hand, Logan has fought boxing legend Floyd Mayweather and KSI but he has yet to pick up a win. Recently, Jake had a little squabble with his brother over business issues regarding his friendship with KSI.

When Logan was asked if KSI is his friend or if it is just for money, he replied: “Yeah he’s my friend and business partner.”

Jake then made a snarly remark saying: “Have you ever given him a reach around?” Shortly after that, he threw some bottles of Prime drink saying: “Yo, Yo, fu** you by the way.”

The sudden action surprised Logan along with everyone present in the episode. Jake then asked Logan: “Why’d you blur my logo? Fu** you!”

The rivalry between the Paul brothers and KSI is well known. However, Logan squashed his beef with KSI and became a business partner for a commercial beverage, Prime Hydration. But it seems like Jake still has issues with KSI, and possibly they will face each other in a boxing ring in near future.

Jake Paul Confronts Logan Paul About His Friendship With KSI

Jake Paul and KSI are long-time rivals. They were set to fight each other back in 2018. But since Jake pulled out from the fight, his older brother Logan Paul stepped in and fought the British star.

Logan’s quarrel with KSI is long gone but the same cannot be said about ‘The Problem Child’. Jake confronted his older brother not only because of his friendships with KSI but also because Logan blurred out Jake’s promoting partner ‘betr’.

Logan Paul did not promote Jake’s ‘betr’ because he already has a partnership with Barstool Sports. Jake’s comments suggest that he is not happy because Logan blurred out ‘betr’. After Jake knocked off some Prime bottles, Logan stated that he knew someday Jake will bring this out.

KSI and Jake are much more likely to face each other in a boxing bout soon. Paul has phenomenal victories over former UFC fighters and has improved his boxing skills drastically over the years. Meanwhile, KSI has also returned to boxing with a rare feat.

KSI returned to action after three years and knocked out two opponents on the same night. In the first fight, KSI defeated Swarmz, a former footballer turned rapper. After that, he fought Luis Alcatraz Pineda in the main event.

Pineda is a Mexican professional boxer, and KSI’s boxing skills looked phenomenal against him. Moreover, KSI also stated that he returned to boxing with the main goal of beating Jake Paul in a potential boxing bout.