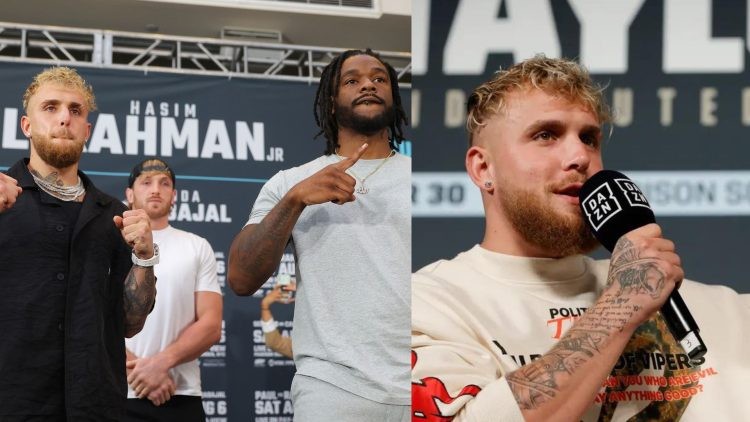 Jake Paul was scheduled to take on Hasim Rahman Jr in the main event of the MSG card in August 2022. However, with weeks away from the fight, Jake Paul and his promotion MVP have decided to cancel the fight after Hasim Rahman Jr attempted to break the contract terms.

As per the contract, Hasim Rahman Jr was not supposed to cut more than 10% of his body weight in the last 4 weeks and both the fighters were to make 200 lbs weight limit.

As per the statement issued by MVP, Hasim Rahman jr assured the New York State Athletic Commission and Jake Paul’s camp that he would make weight on August 5th.

However, since signing the fight Hasim Rahman jr has not lost significant weight, which forced NYSAC to schedule the bout for 205 lbs weight class.

#PaulRahman has been cancelled. Refunds for all ticket and PPV purchases will be provided. Full statement below. pic.twitter.com/thnjyjUEMT

Despite the changes, Jake Paul was willing to take on Hasim Rahman jr at MSG until his opponent demanded to fight at 215 lbs. Moreover, Hasim’s camp later revealed that they were planning to weigh in at 215 lbs from the beginning.

MVP promotion called this Hasim’s behavior deceiving and calculated. With the cancelation of the event, many boxers such as Amanda Serrano will be affected. MVP also assured that the fans will get their refunds for their PPV buys and ticket purchases.

This is certainly an unfortunate outcome of the whole situation where the whole event is cancelled. Fans were looking forward to see how Jake Paul performs against a professional boxer, who has fair amount of experience.

However, the weight difference between the two opponents was huge to begin with. After Hasim Rahman Jr’s decision to not cut weight fans and many pro boxers suffer the consequences.

Jake Paul was originally scheduled to fight Tommy Fury. But, after visa issues Fury pulled out of the fight, which forced Jake Paul to pick another opponent for his boxing return.

After the fight getting cancelled for the second time, the Problem Child reacted to the whole situation on Twitter and apologized to the fans.

“First Tommy Fumbled and now Hasim Rahman Crumbled. These boxers are the most difficult people to work with and continually lack professionalism and confidence to fight me. I apologize to all of the of the other fighters on the card, our partners, our team and the fans.”

What do you think about the whole situation around Jake Paul vs Hasim Rahman Jr?

“Who Do You Think Broke It”- Magomed Ankalaev Breaks Anthony Smith’s Leg, Finishes Him in Round 2 at UFC 277