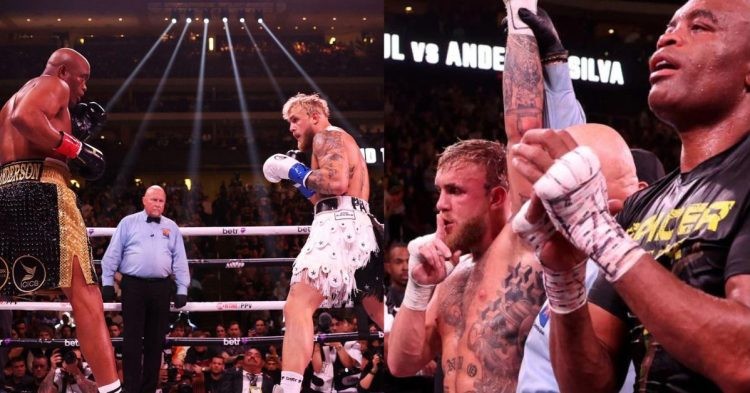 Jake Paul is still undefeated after beating the UFC legend Anderson Silva via unanimous decision. Paul has now improved his professional record to 6-0. No one got knocked out as some critics and fans predicted, but Paul topped this victory when he knocked down Silva.

From the opening round, Paul started with some vicious shots, while Silva looked composed and parried most of the shots. Silva started to pressure in the second round and caught Paul with a left hook. Both the fighters landed some big shots throughout the fight but the sixth round saw some action.

In the sixth round, Silva complained of an illegal headbutt from Paul. The commentator also talked about the headbutt that bloodied up Silva. After this Silva was complaining every time Jake tangled up with him.  At a point, Silva seemed to get angry about it, however, the referee didn’t interfere and the fight continued.

From the early round, ‘Spider’ maintained a calm composure while showboating as he always does. However, in the last round, Paul landed a combo that dropped Silva on the canvas. This was a big moment for ‘The Problem Child’, as he knocked down the UFC legend. The fight ended and Paul walked away with the biggest win of his career.

Anderson Silva comments on losing to Jake Paul by decision

Jake Paul proved that he has what it takes to face a world-class striker. He outpointed Silva and won the bout via unanimous decision. With this victory, Paul will now have more opportunities coming his way. ‘The Problem Child’ embraced his childhood hero after the fight and proved the doubters wrong.

Meanwhile, Silva was asked after the fight about his opinion of the judge’s decision. The UFC legend gave no excuse and accepted his defeat. He said: “It’s tough to come in here with a young kid and today Paul was better than me.”

“Jake is better than me today. I don’t have nothing to say bad about my opponent. I think everybody needs to respect this kid because he’s doing the best job. I trained hard, I am a warrior, and I know when a fight is hard. It’s a very hard fight for me today,” Silva added.

The ‘Spider’ confirmed that he is not stopping with this defeat and will continue to fight. At 47, Silva looked great in the ring and avoided a bad beating. He also landed some significant shots but Paul was relentless and did more damage.

When it is not confirmed when Silva will fight again in boxing, he stated that he plans to fight in a jiu-jitsu tournament after this fight. On the other hand, Paul called out Nate Diaz after the fight. Diaz was also involved in a backstage brawl with Paul’s team and seems like Paul is looking to pick a fight against him next.