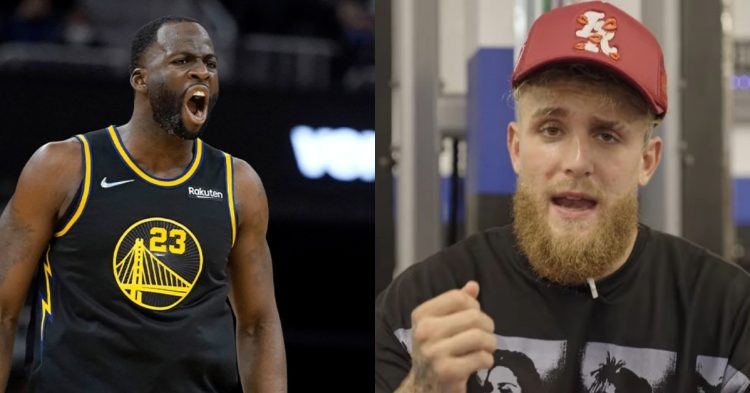 Jake Paul may just lure in NBA superstar Draymond Green for a boxing match after Green’s recent scandal of punching his teammate!

Jake Paul never loses an opportunity to grab the headlines. After turning pro, Jake has now dedicated his life to the craft of boxing. Not only does he fight inside the ring, but Paul also has a promotional company by the name of Most Valuable Promotions.

While the company is still pretty small in stature, Jake managed to sign women’s champ Amanda Serrano as its very first client. However, its newest recruit may not be a boxer at all. Recently, Jake took to Twitter to offer Golden State Warriors player Draymond Green a contract worth $10 million to step inside the ring for MVP and fight whoever he wants!

Draymond I got $10 million for you to get in the ring on the next Most Valuable Promotions pay per view. Who you want? @Money23Green

Jake also went on add that he would get rid of Green very quickly if they fought and the fight between them will not be very competitive.

To be clear the JP that Draymond slept is Jordan Pool. This JP would sleep Draymond in 1 round.

For the fans who are unaware, Draymond Green recently sucker-punched his Warriors teammate Jordan Poole. Apparently, Jordan Poole was set to receive a very financially lucrative extension deal from the team. It became a major issue as Poole’s behaviour changed after the talks of extending his deal. He started abusing his teammates as the wealth got to his head.

According to reports, tensions were running high from the very beginning during that particular practice session. Poole’s behaviour apparently irked a lot of his teammates. So it is very much possible that Jordan insulted Draymond in such a way which made the 32-year-old get into the former’s face and knock him out with a sucker punch.

Damn. That is a very clean KO. Poole was out. Not sure how you can keep them both on the team after that. pic.twitter.com/j1O2FOSYU9

Although what Green did was certainly condemnable, it has to be pointed out that the punch was clean. He threw the punch without loading up and landed a picture-perfect KO. Hence, Green may as well consider Jake’s offer of fighting inside the boxing ring for a change. If his blow against Joran Poole is anything to go by, Draymond Green will do just fine in boxing!

When is Jake Paul fighting next?

Jake Paul is also scheduled to return to action very soon as a matter of fact. He was initially set to face Tommy Fury on August 6th in the Madison Square Garden Arena (MSG). However, Tommy had to be replaced by Hasim Rahman Jr due to security reasons. But Rahman Jr refused to make the agreed-upon weight, hence the event was scrapped altogether.

The most anticipated fight of year is 28 days away. Live on pay-per-view from Phoenix, Arizona. #PaulSilva pic.twitter.com/nlEAlXPBuM

But the fans breathed a sigh of relief after The Problem Child announced that he will go up against a former UFC champ, Anderson Silva. Although Silva is much beyond his prime, he is still a great threat to the 25-year-old. Silva even beat former boxing champ Julio Cesar Chavez Jr in a boxing match. Can Jake Paul overcome that obstacle and improve his boxing record? Fans will find out on October 29th!