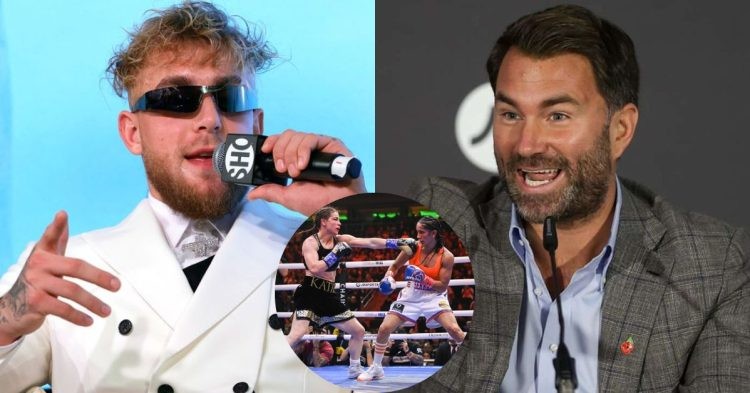 Katie Taylor defended her undisputed lightweight titles against Amanda Serrano in what was an epic war that took place at the Madison Square Garden in May this year. However, the Irish boxer’s split decision win was not very clear as it was extremely tight and could have gone either way.

After the fight, Serrano’s promoter Jake Paul slammed the judges for scoring the rounds badly. His criticism towards the judges’ didn’t stop there as a few months later Jake objected to Glenn Feldman for favouring Anthony Joshua in the rematch against Oleksandr Usyk.

The Problem Child also made a bold claim in an interview with IFL TV that Matchroom boxing promoter Eddie Hearn bribed judge Glenn Feldman for the Taylor vs Serrano and Usyk vs Joshua 2 fights. Jake’s comments didn’t go down well with Hearn as the British promoter has filed a lawsuit of $100 million for defamation and false allegations.

Eddie Hearn’s attorney revealed that Jake was threatened that legal action would be taken for his comments. He said that The Problem Child crossed the line with his bribing allegations and has to bear the consequences for purposely accusing Hearn.

Will a rematch between Katie Taylor and Amanda Serrano take place?

The first fight between Katie Taylor and Amanda Serrano was historic as it broke the record for the most watched female professional fight. After a dramatic ending to the undisputed title fight, everyone was expecting a rematch to take place.

With both promoters Eddie Hearn and Jake Paul agreeing to work towards a rematch, the two fighters squaring off again looked possible. Interestingly, Serrano’s promotion MVP denied a quick rematch offer from Hearn and this led to both the fighters facing different opponents.

Moreover, there is an ongoing dispute between Hearn and Paul with which the likelihood of a rematch taking place has significantly dropped. Hence as long as there is bad blood between the two promoters they won’t come together to discuss the terms for the fight.

Besides, both Serrano and Taylor are not pushing for the rematch which makes it more improbable to happen. The only way this fight gets scheduled is if the boxing commission makes it mandatory for the Irish champion to defend her belts against Serrano.