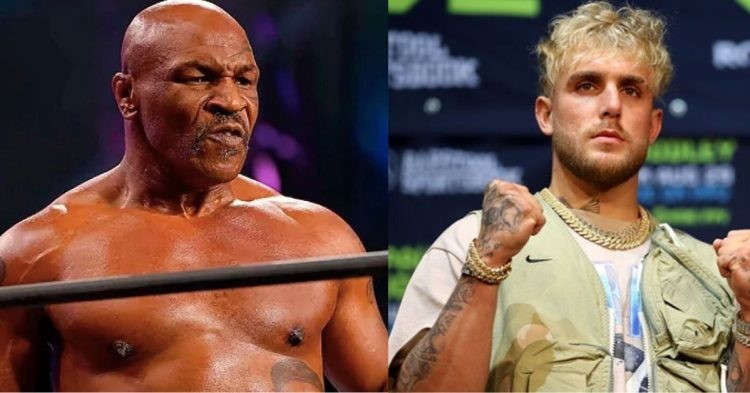 For a long time, Jake has been adamant about fighting the boxing legend at some point, and Tyson has also been vocal about doing it. However, as Jake has already a fight booked with the UFC legend Anderson Silva in October, he will have to wait a while for that to happen.

In the press conference for his fight against Silva, Jake was asked about his potential fight with the legendary Mike Tyson.

“Mike Tyson! That would be crazy,” Paul said talking about his next potential fight.

“I have so much respect for him. He’s another one of my idols, and he said he wanted to do the fight. Mike, where are you at? Bro, you said it on Jimmy Kimmel or Jimmy Fallon, one of the Jimmies, so let’s make it happen.”

A fight between ‘The Problem Child’ and ‘Iron’ Mike would be a huge mark for Jake, and given that Tyson can still box pretty well at 56 years old, it’d be an interesting matchup.

However, it has not been confirmed yet, especially from Tyson’s end. Meanwhile, Paul takes on another legend in Silva which happens on October 29th.

Jake Paul always had the desire to fight his idol and the boxing legend Mike Tyson. So much so, that Paul stated that it is one of his dream fights. However, there have been no developments around that match and Jake has a couple of fights in his mind.

Earlier in an interview, Jake jokingly stated that Mike might’ve been avoiding fighting him as the legend doesn’t want to hurt him. Paul said:

“I think he thinks that he would knock me out, and I think that’s maybe the reason why he doesn’t want to do the fight. I think he wants to avoid maybe knocking me out, hurting me.”

However, earlier this year, Tyson was rumored to face Jake’s brother, Logan Paul in an exhibition bout but that ended with Tyson stating that he was done taking exhibition fights altogether.

Apart from facing Tyson, Paul has a list of opponents after fighting Silva. There is a possibility that Jake would face Tommy Fury later this year. Also, it is possible for Jake to fight against Nate Diaz, now that the former UFC star is out from under his contract.