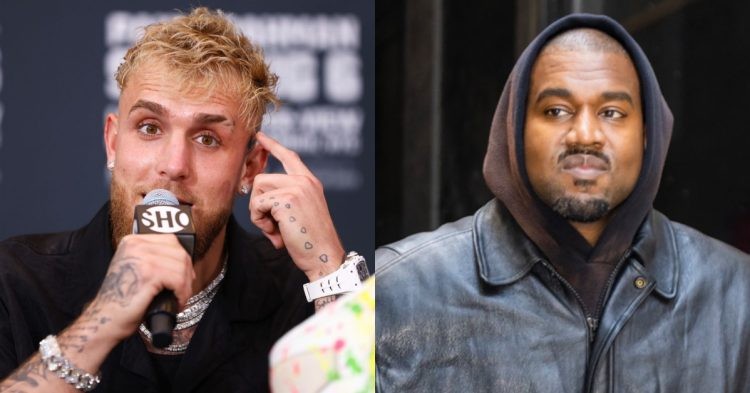 Kanye West has dominated the headlines in recent weeks and months. Recently, he targeted Facebook founder Mark Zuckerberg for his ban from Instagram. It does not look like Kanye is stopping anytime soon as he doubled down on his comments. But, in an unlikely occurrence, Jake Paul decides to call out a popular footwear brand for backing the controversial music artist.

After Kanye’s anti-semitic comments, major brands are cutting ties with him. Although brands like Balenciaga, Gap and JP Morgan already distanced themselves from West, Adidas was still backing the 45-year-old. But that changed recently as Adidas put out a statement where they officially condemned Kanye’s words and announced that they will no longer be in business with the rapper.

Following Adidas’ statement, Jake Paul took to Twitter and shared an idea. Adidas was in a contract with Kanye to sell his footwear brand Yeezy. But, now that Adidas will no longer sell the brand, they will have a lot of unsold shoes in the inventory. Hence, Jake Paul suggests, the German brand should give away the shoes to underprivileged children.

I hope Adidas gives all of the Kanye inventory to underprivileged kids around the world for free.

Jake is a controversial figure himself. But his idea of distributing the unsold shoes to children, who can not necessarily afford them, is a great one. It will be a great initiative for the brand, especially with the holiday season coming up.

As per Forbes, Adidas has generated revenue of $25.1 Billion and has earned a profit of $2.5 Billion this year. In 2022, the company’s assets are worth $25.2 Billion. So Jake’s idea of giving away the shoes will not hurt their bottom line too much.

Jake Paul is fighting Anderson Silva in Phoenix, Arizona on October 29th. Paul is coming off a knockout win against Tyron Woodley in December last year. Although he was set to fight earlier this year, the card was eventually cancelled after neither Tommy Fury nor Hasim Rahman Jr could make it to the event, for various reasons.

The Problem Child initially picked up the gloves in 2018 against Deji for an amateur bout. But, he was not serious about becoming a professional boxer until 2020, when he fought AnEsonGib. Paul showed a glimpse of his boxing talent, as he KO’ed Gib in the first round. He fought in the undercard of Mike Tyson’s return bout in November 2020, where he flatlined Nate Robinson.

It created a big hype around him as the fans hailed his power. Although winning over non-combat athletes was fun, Jake stepped it up and fought former MMA champ, Ben Askren. Paul knocked out Ben at the 1:59 minute of the first round. After a tough split decision win over Woodley, Paul knocked him out in the rematch.

Paul currently has a boxing record of 5-0 and has the chance to improve on that against Anderson Silva. If the result goes his way, Paul has a couple of options for his next fight. A fight between him and fellow YouTuber KSI would be a big event. But he will make the most amount of money against the former UFC fighter, Nate Diaz.