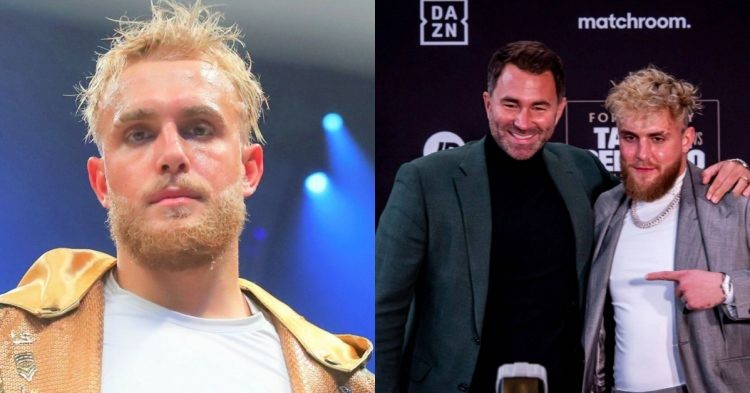 It looks like Eddie Hearn has had enough of Jake Paul. Hearn is suing Paul for a reported $100 million for defamation. Once successful business partners, have turned into public enemies in the blink of an eye.

Jake Paul was scheduled to fight Hasim Rahman Jr earlier in August. However, Hearn stated at the time that the fight was cancelled because the bout was not selling enough tickets to justify an event inside Madison Square Garden (MSG). Paul was not impressed with the comments made by Eddie and he returned the favour with some comments of his own on Matchroom Boxing.

Recently, Eddie Hearn’s biggest star Anthony Joshua had a chance of avenging his loss to Oleksandr Usyk. However, Usyk was too good for Joshua and put on a great performance. But, the decision was not unanimous and judge Glenn Feldman scored it for Joshua. It led to Paul saying Feldman was on the payroll of Hearn’s promotion.

It has not gone down well with the British promoter who feels as if the comments were made with the intention of defamation. Eddie Hearn issued a statement via his lawyer Frank Salzano. Salzano stated that Paul had time to withdraw his comments, but The Problem Child chose not to and stuck to his guns.

“Both legally and ethically there is a clear line separating opinion from defamatory lies. Jake Paul knows that, and he purposely crossed that line when he wrongly accused Matchroom Boxing and Eddie Hearn of fixing fights.”

“Nonetheless he was still given an opportunity to retract his defamatory statements and refused to. Now he will face the legal consequences of his actions as Matchroom and Mr. Hearn will be seeking damages in well excess of $100 million given the value and goodwill attached to the Matchroom business and the harmful nature of Mr. Paul’s comments.” (h/t via Bleacher Report)

Jake Paul returns to boxing against Anderson Silva in October

Jake Paul is never too far away from controversy and the latest defamation suit against him just proves that. Even recently, he was linked with controversial figure Andrew Tate for a fight. Despite some interest from Tate’s side, Jake’s team decided to go with Anderson Silva instead. It made the MMA fans very happy as many touted Silva to be the fighter who brings an end to Jake Paul’s unbeaten run.

However, unlike some of his other opponents, Jake Paul has no malice toward the Spider. Growing up Jake Paul and his brother Logan Paul were big fans of the former UFC champ. They even recreated a childhood photo with Anderson Silva during their press conference. Although Jake wants to knock out Silva, Paul wants to do it “respectfully.”

Are you excited about the upcoming fight on October 29th in Arizona? What are your thoughts on the lawsuit filed by Eddie Hearn against Jake Paul? Let us know in the comments down below.