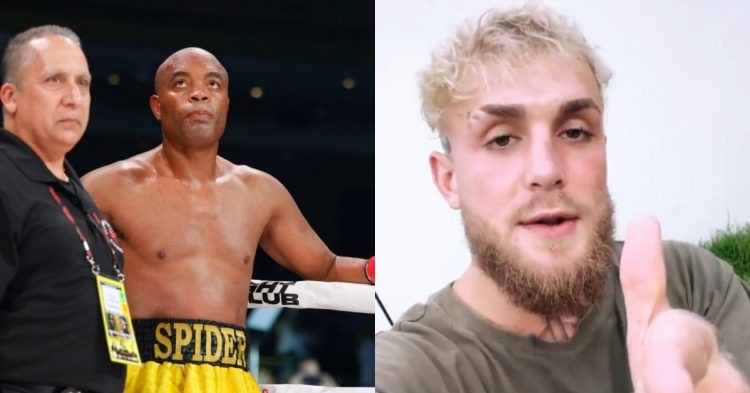 Jake Paul fans can finally rejoice as there is finally an announcement regarding his next fight. It is official, Jake Paul vs Anderson Silva will go down on October 29th in Phoenix, Arizona. The confirmation comes after a lot of speculation regarding who his next opponent might be!

The Problem Child had August 6th booked for his return to boxing inside Madison Square Garden (MSG). He was originally scheduled to fight Tyson Fury’s half-brother Tommy Fury. However, Fury was not able to enter the country due to some security issues. But Paul was able to find another opponent very soon.

Paul then secured heavyweight pro boxer Hasim Rahman Jr to serve as his opponent for the event. They even held a press conference to promote the event. But it was ultimately cancelled as Rahman Jr was not willing to make the originally agreed-upon weight of 200lbs. After that, there were murmurs of Jake taking on Andrew Tate.

But the recent announcement puts all the speculation to bed. Paul’s own promotional company MVP put out a video where Paul announced that he will fight Anderson Silva. The excitement on his face was visible as he was confirming the news. However, he also made a prediction for the outcome as well!

“What is up MVP family? I wanted y’all to be the first to know, it is official, me (Jake Paul) vs Anderson Silva, October 29th, Phoenix Arizona. It is an honour to be in there with the legendary Anderson Silva. Although, I’mma knock him out in under 5 rounds.”

The news of Jake Paul fighting Anderson Silva is exciting on so many levels. Fans are used to seeing Jake Paul dominate his bouts. The most credible opponents of his career so far were Ben Askren and Tyron Woodley. Neither had any pedigree in boxing to give Jake any trouble.

While Askren was a wrestler with almost zero striking skills, Woodley’s chin was supremely compromised. So Jake knocking both of them out was a surprise to none! Hence, there was excitement regarding the Rahman Jr fight as Hasim was a legit boxer with a moderately good CV.

However, there were whispers of Jake possibly fighting another YouTuber in KSI after the Hasim fight fell through. But the Anderson Silva fight is probably the most exciting match-up that the fans could have hoped for. Anderson Silva holds the record for the most consecutive wins in the UFC with 17. He is considered one of the GOATs in MMA.

But Jake will be fighting Silva in a boxing ring. However, Silva’s boxing is also pretty decent. In his last pro boxing bout, Silva knocked out former UFC light heavyweight champ Tito Ortiz inside a round. But the most exciting result of his boxing career was against Julio Cesar Chavez. Chavez is a former WBC super welterweight and middleweight champ.

However, Silva made Julio look like an amateur at times and defeated him via a split decision. Silva, at the age of 47, defeated Chavez who is only 36. So Silva can definitely still take a shot. Boxing gloves are much more padded than MMA ones, so it will help The Spider absorb punches much easier.

Silva has experience worth three decades, so it is the toughest challenge that Jake has come across yet in his career. Silva’s fast hands and efficient technique will put Jake’s training to test. Can the 25-year-old overcome it? Only time will tell!