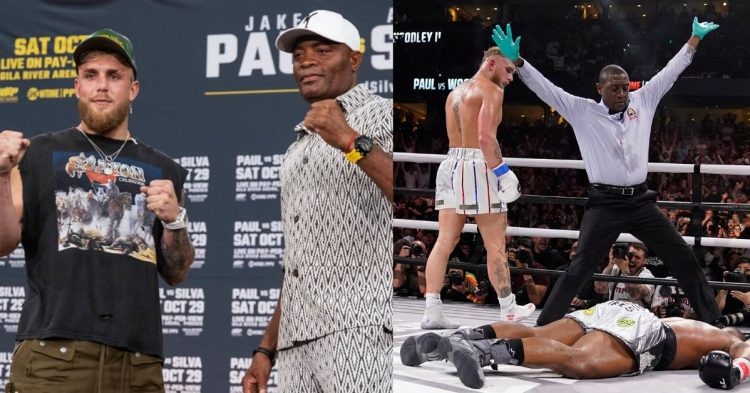 The ‘Problem Child’ Jake Paul is scheduled to fight ‘The Spider’ Anderson Silva on October 29. Paul wrote in an Instagram post “My toughest test yet. I respect the legend, but he must be exterminated”.

In the last two years, Jake Paul has raced to a professional record of 5-0 without fighting a single professional Boxer. Now the YouTuber turned boxer has decided to take on another UFC giant, Anderson Silva. His oldest yet toughest opponent till date. Silva returned to professional boxing just a year ago, and in a shockingly impressive performance, Silva defeated the former WBC middleweight champion Julio Cesar Chavez Jr. via split decision. He then knocked out Tito Ortiz in just 81 seconds to gain his third boxing victory. Paul on the other hand is undefeated, coming off a highly impressive knockout victory against another former UFC champ Tyron Woodley.

Anderson is 22 years older than the social media star Jake Paul, at 47 compared to Jake’s 25. The fight will take place over eight three-minute rounds and see Jake trying to bag his sixth boxing victory.

Jake Paul stands at 6 ft 1(185cm). The five professional fights he has had have been in the cruiserweight division, that is to say, in a range between 175 lb to 200 lb although he has never touched the limit of that division at the weigh-ins yet. In his last fight against Woodley, he came in at 191.4 lb.

Anderson Silva on the other hand who stands at 6 ft 2(188cm) was the most successful UFC Middleweight(185 lb) champion but he regularly stepped up in weight to fight in the light heavyweight(205 lb) division, after all, some of his best performances came in that division. Worth mentioning that Anderson Silva came in at 192.6 lb in his previous outing against Tito Ortiz.

Although this fight would be a catchweight(187 lb) bout. Talking to ESPN Paul said “The plan is for me to fight at 185lb going forward and that’s what I wanted this fight at given it was the weight Anderson Silva fought at during his reign as the most dominant UFC champion ever. Anderson’s team asked if we could set the weight at 187, two pounds more than what I wanted. That level of professionalism and precision is appreciated, and of course, I agreed to his request.”

Both of the fighters are as even as it gets, there isn’t much that separates them physically. Technically Silva is way ahead of Paul following his two-decade MMA experience. But that’s what most of us thought when Paul fought Woodley, and he defeated Woodley not just once but twice and in some fashion in their second meeting.