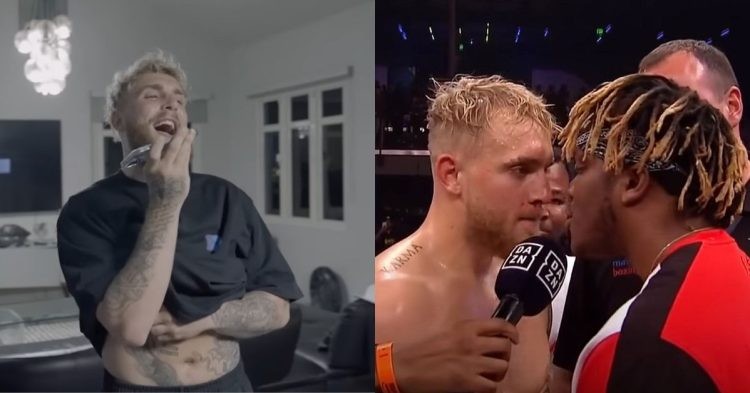 Prime Hydration co-founder KSI, and celebrity boxer Jake Paul, got into a heated argument as they discussed a potential fight. The pair of celebrity boxers were invited to a Twitter Spaces social media call. And things got quite heated between the two as they exchanged barbs.

Paul and KSI had to be separated as they got into a heated altercation during the Deji vs Mayweather exhibition. However, no fight has been booked between the two just yet. Their intense argument last night, however, gave fans renewed hope about this match-up.

“I’m here to build Misfits and take you out. Bro Misfits is long term I signed a deal with DAZN,” said KSI. To this, Jake Paul simply replied, “I’m ready”. Things then escalated further as KSI dismissed Paul’s response as a lie. “That’s cap though. You say you are ready but then the negotiations don’t say that. You are full of s***,” added the British YouTuber.

Jake did not take this lying down as he came back with, “I agreed to fight you for free and you know that and everyone online knows that on short notice. You had me two weeks for free and you still p***ied out.”

This fight seems on the cusp of happening. However, with Misfits Boxing signing a deal with DAZN and Jake Paul doing the same with the PFL, does put some question marks on the logistics of the potential fight.

Will Jake Paul and KSI fight each other and when will they fight?

KSI, whose real name is JJ Olatunji, was scheduled to fight Dillon Danis on 14th January. However, in a dramatic turn of events, Danis pulled out of the fight with just days to go. This is why KSI finds himself with a short-notice fight against FaZe Temperrr come Saturday.

However, one thing will keep fight fans and especially, fans of KSI’s fights invested. And that is a fight between KSI and the brother of KSI’s business partner, Jake Paul. Both of them are undefeated in the boxing ring. The Brit holds a record of 3-0 while Paul holds a record of 6-0 after his win over Anderson Silva.

A fight between the two has been massively hyped and foreshadowed. With multiple callouts and even more sly digs at each other, this match seems to have gotten personal. And, on the same Social Spaces phone call, fans received an update of sorts.

Paul asked JJ point-blank, “KSI do you want to fight over the summer?” To this KSI responded, “I said what I said at the end of the year. Are you f***ing dumb? I am going to fight you.”

It seems as if this heated fight between two rivals will be happening at the end of 2023. Although Paul asked KSI to specify when exactly the fight would happen, the British boxer refused to go into the details. With countless insults and threats being hurled in both directions, the build to this fight has the potential of being very exciting and somewhat scandalous, to say the least.