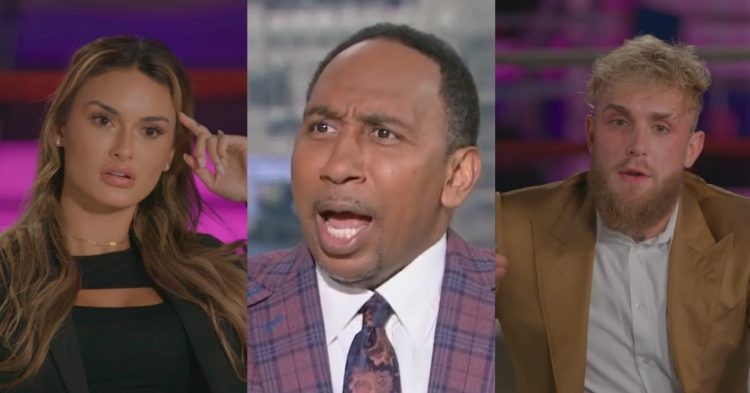 Floyd Mayweather is on a run of exhibition fights which will see him taking on Deji Olatunji in Dubai on November 13th. He recently knocked out Mikuru Asakura in the second round of an exhibition fight as well. Although some fans enjoy it, others like Jake Paul and his girlfriend Julia Rose think Floyd is tarnishing his legacy. But Stephen A. Smith disagrees with them wholeheartedly.

The ESPN host and sports personality, Stephen A. Smith recently appeared on Jake Paul’s podcast, BS w/ Jake Paul. During their conversation, Paul’s girlfriend Julia Rose asked Smith his thoughts on the series of exhibition fights that Floyd has lined up for himself. Although Rose described the contests as “bullsh*t,” Stephen shut her down immediately!

There can be no argument that Floyd Mayweather is one of the best boxers of all time. Over the course of his 27-year pro boxing career, Mayweather has beaten the likes of Shane Mosley, Miguel Cotto, Canelo Alvarez and Manny Pacquiao. He finished his career with a win over former UFC champ Conor McGregor and had a record of 50-0.

Hence, Stephen A. Smith thinks Mayweather has more than earned the luxury of accepting the exhibition fights. Floyd is currently 46 years of age. As a result, he is merely having fun after having such an illustrious career. Smith also assured that Mayweather has more than enough in the bank to stay retired. But he is still prolonging his inevitable exit from the sport as he is still having fun.

“No,” Smith went on to elaborate why he does not think Floyd is ruining his legacy, “here is the reason why. He’s retired, no. 1. No. 2 he had already proved himself as a world champion, made a whole boatload of money, got $700 million in two fights for crying out loud! He did all of that stuff. Then he retired and he has announced that essentially these are exhibitions.”

Is Jake Paul angling for a fight against Floyd Mayweather?

The beef between the Paul brothers and Floyd Mayweather is nothing new. Mayweather took on Jake’s elder brother Logan Paul on June 6th of 2021. Although Logan and Floyd did their part to promote the fight, the biggest publicity that the bout received was thanks to Jake Paul.

During the fight week, Floyd came face to face with The Problem Child. After getting into each other’s faces and exchanging some brief words, Paul snatched Mayweather’s hat which ticked off the veteran. They had a huge brawl afterwards and it created a lot of hype for the fight.

So the groundwork for a potential showdown between them has already been laid out. They already have history and Jake is a much bigger star now than he was back in 2021. While Floyd is fighting Deji in November, Jake Paul is set to face a very tough challenge in Anderson Silva in late October.

The opportunity to book an 8-round exhibition fight between them is still very much alive if the results go a certain way.