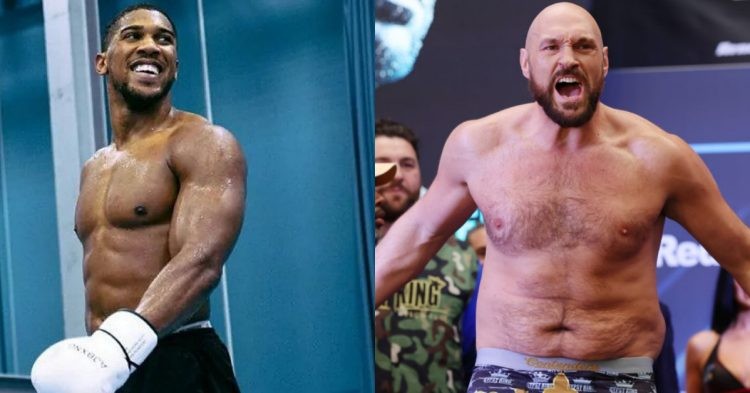 Eddie Hearn provides a very important update on the possible Tyson Fury vs Anthony Joshua matchup. News broke earlier that Tyson Fury was ready to come out of retirement to face Joshua in a mega-fight on December 3rd. Although There were rumours that Joshua will be fighting Oleksandr Usyk next, it looks like Joshua will be next instead.

Tyson Fury retired after beating Dillian Whyte in April of this year. However, he did hint toward coming out of retirement if there were any good enough opportunities. Fighting Joshua in England inside a big stadium is a massive event and The Gypsy King does not want to pass it. He called out Anthony and made a video addressing him.

I’ll make it nice and quick for ya @anthonyjoshua pic.twitter.com/2EngHde8xF

Now it looks like Joshua’s camp has also accepted the terms of the fight. In a recent appearance on the MMA Hour, Joshua’s manager Eddie Hearn revealed that they are more than open to fighting Tyson Fury on his terms.

“We accept and have accepted the fight. We’ve accepted the terms. They tell me it’s real and if it is real, I believe the fight will get made and I’m excited for that fight as we’re for this weekend’s. So I think it’s boxing, it’s MMA, it’s UFC, everybody is talking about the next one or what might be happening with the next one. So we await the contract for Joshua-Fury and It’d be a pleasure to be involved with.”

As fans know, Anthony Joshua is coming off two losses against Oleksandr Usyk recently. Hence, his stock is not exactly high in the eyes of the fans. So having the chance to box the best active heavyweight is incredibly lucrative and it is something that AJ will be foolish to refuse. So it does not come as a surprise to see Eddie Hearn accepting the challenge on AJ’s behalf.

As mentioned previously, Anthony Joshua’s recent losses have done him no favours. There were questions about his legitimacy as soon as Andy Ruiz beat him in the Madison Square Garden arena in 2019. However, he avenged the loss against Ruiz in a dominant fashion and then went on to knock out Kubrat Pulev.

But just when he was on road to recovering his credibility, the losses against Oleksandr Usyk happened. So there are questions about his durability and temperament against boxers who are equally as skilled as him. Hence, the fans are not confident about his chances at all against Tyson Fury, who may just be better than Joshua in every aspect of the game.

As soon as the talks surrounding AJ vs Fury started, the fans expressed their displeasure. A majority of the fans don’t think the 32-year-old deserves the opportunity and will be humiliated in the ring.

Underneath an Instagram clip of Hearn’s MMA Hour video, a user by the handle of @tambradyy wrote, “if it does eventually happen, Joshua is about to get schooled again.”

Boxing continues to give you the fight you should have had 5 years previous. Too little too late. Boxing also the only contact sport you can fail upward. How does Joshua get Fury?

Fury fighting tomato cans at the end of his career, as all old fighters do /s

If Fury actually trains for this (don’t know why he wouldn’t), I don’t know what answer Joshua would have. Fury by TKO Rd 9

What are your thoughts on the fight? Do you think Tyson Fury easily beats Anthony Joshua? Or do you think we’re in for an upset? Let us know in the comments down below.