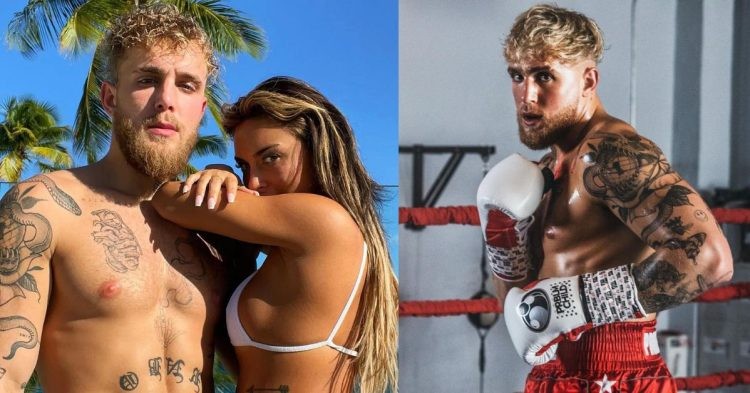 Famous Youtuber-turned-boxer Jake Paul has taken the boxing world by storm and has fought some of the biggest athletes from other sports. Paul has established his name as a professional boxer after knocking out former UFC champions Tyron Woodley and Ben Askren.

‘The Problem Child’ is now set to face the toughest opponent in his career, UFC legend Anderson Silva. Many critics and fight fans have ridiculed Paul for fighting non-boxers and opponents usually smaller than him. If Paul beats Silva, then he will silence a lot of doubters.

Paul is taking this fight seriously as he is very much focused on training. Reportedly, Jake has taken a break from his relationship with Julia Rose to improve his boxing skills. In an episode of BS with Jake Paul, he said:

“Julia is not here; she got kicked out of training camp because we’re not allowed to have girls around.”

Paul then went on to explain why he is avoiding women before the biggest fight of his career. Paul further added:

“Just to like build up to that dog mentality and to lock in and really train like a caged animal. Because, when you’re around a girl there’s a neurochemical called oxytocin that’s released and it makes you relaxed, it makes you more comfortable.”

According to Paul, he needs to train like ‘a caged animal’ and avoid any kind of distractions to prepare for the UFC legend. Paul will return to the boxing ring for the first time since his KO win over Tyron Woodley last year.

Jake Paul will face the toughest opponent in Anderson Silva

Even though Jake Paul has an unbeaten boxing record, he has never faced an actual striker in the boxing ring. With a win against Silva, Paul will prove to be a legitimate boxer.

Since his boxing debut, Jake Paul has been ridiculed for not being an actual boxer. Moreover, Paul picked opponents who were non-boxers and fighters who were past their prime. Paul proved the doubters wrong when he knocked out Woodley with a single punch and Askren before.

Recently, many analysts and fighters said that Silva poses a threat to Paul’s career. If Paul manages to beat ‘Spider’, he will get the respect of the boxing and MMA world. Moreover, Paul has improved very much as a boxer and now has the skillset to fight on a higher level.

The former UFC champion is known for being an elite striker and on many occasions, has demonstrated his astounding skills. Paul also tried to fight Tommy Fury and Hasim Rahman Jr., who are professional boxers. However, both fights were canceled due to some reason.

But for now, ‘The Problem Child’ will fight a dangerous striker who although past his prime, is still dangerous. Paul will meet Silva on October 29th which is to be streamed on Showtime PPV.