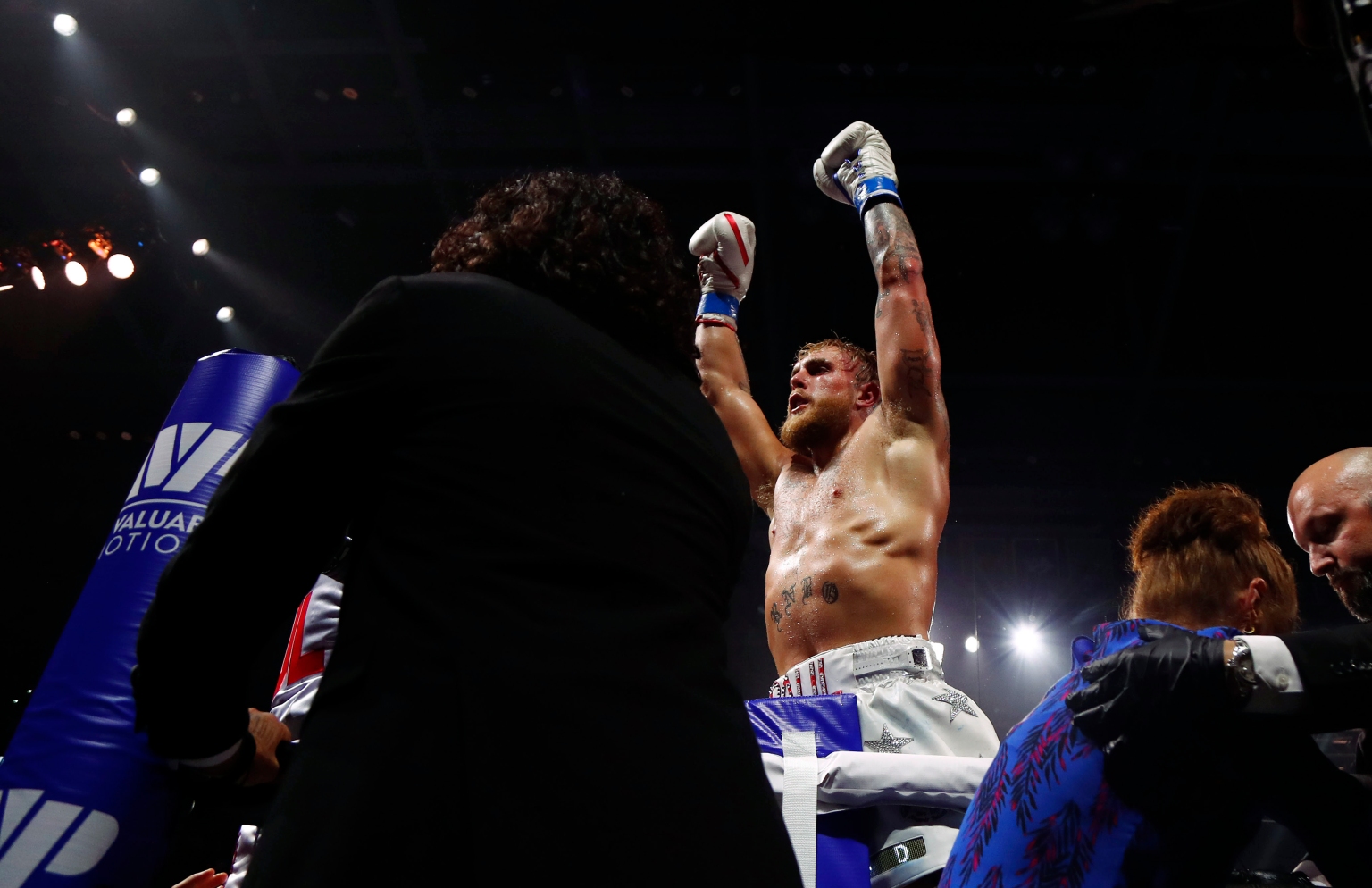 Jake Paul knocks out Tyron Woodley! The much-anticipated rematch took place in Tampa, Florida moments ago. Coming into the fight, both fighters promised that the fight will end in a knock-out. Jake went the extra step to add a stipulation of adding $500,000 USD to the pursue of Tyron Woodley if the former UFC Welterweight champion knocks him out. It certainly made the prospect of seeing a potential highlight-reel knock out a big probability. In recent years, Tyron has not been able to fight in a free-flowing manner. Although his powers are still very much present, it’s his ability to throw the punches in a flurry that seems to be missing.

But before today’s event, Woodley repeatedly talked about Jake’s power. The 39-year old said he respected Paul’s power and did not want to engage in an unnecessary brawl and get finished. 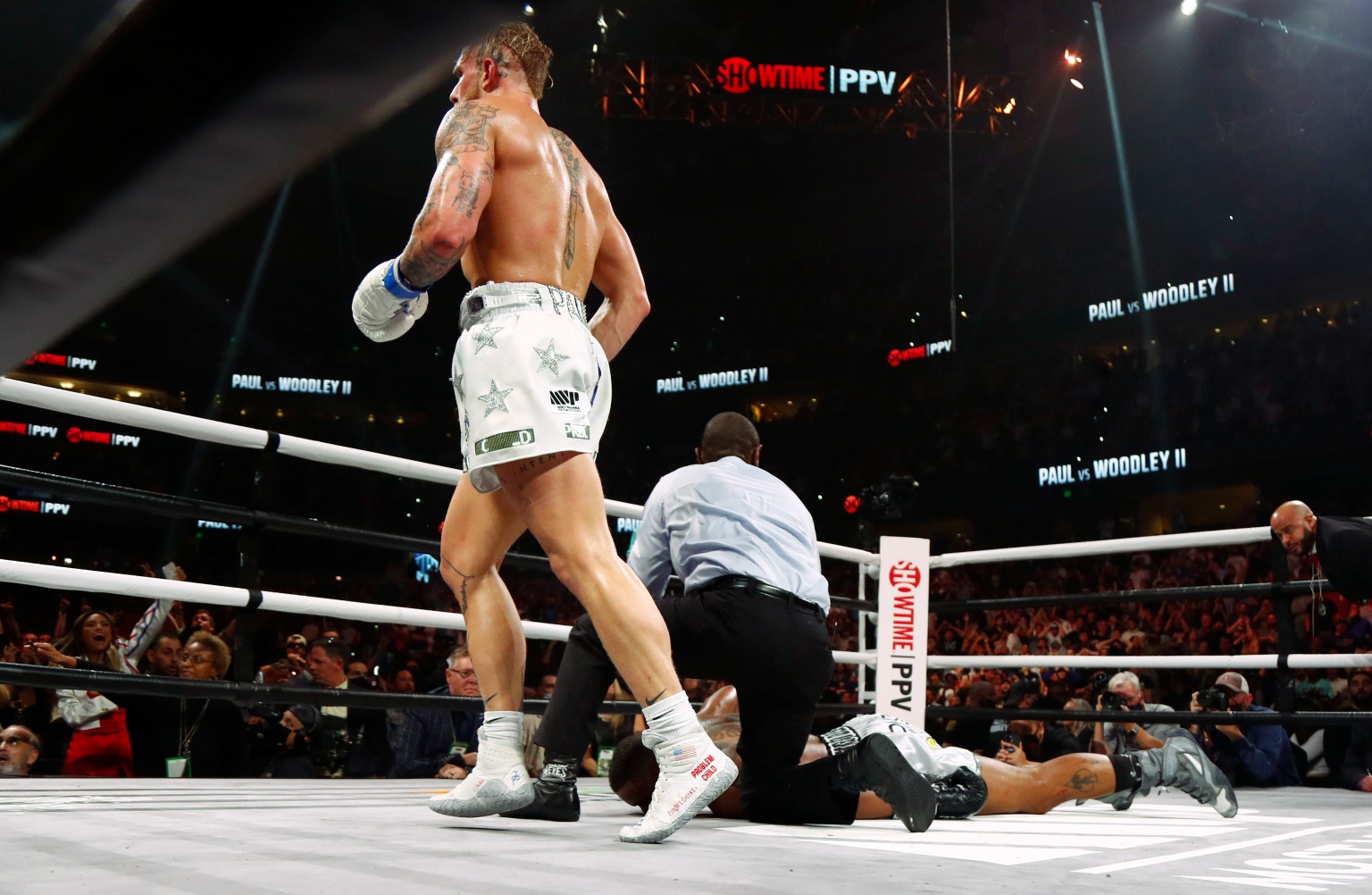 But as fate would have it, Woodley got finished by a massive right-hook from the 24-year old. The fight was very slow-paced from the start. Neither fighter seemed keen on overextending. The risk of getting caught made this fight a very dull affair to watch for the first 5 rounds. The start of the 6th round seemed to follow the same route.

However, in the blink of an eye, Woodley was down on the canvas face first. Jake Paul faked the right hand and Woodley took the bate. Without wasting a moment of time, Paul followed up a massive right-hook to put Tyron’s lights out.

The shocking and vicious Knockout has set the microblogging site ablaze. The rumbles of the thundering KO has rumbled around the Twitterverse. Reactions are pouring in for the fight. Catch the Twitter reactions below.

Jake Paul’s opponents have all had similar endings 😬 pic.twitter.com/sKtNdrxUWx

He may also have some words for Nate Diaz… pic.twitter.com/bBIpZNOvkQ

This ringside angle of Jake Paul knocking out Tyron Woodley is wild! 🤯 #PaulWoodleypic.twitter.com/XVvQDgFBC2

Jake Paul salvaged that big time. That fight was boring and headed towards disaster in terms of being a box office attraction. That win saved a lot for him.

Bruh let his moms down … He don’t even wanna look at her😂😂😂#PaulWoodley2 pic.twitter.com/p4fkQUEXRW

The mma community looking at tyron woodley again after getting ko’d by jake paul #PaulWoodley2 pic.twitter.com/O5p15zTSYr

Absolutely BRUTAL one-punch knockout from Jake Paul, who puts Tyron Woodley out flat on his face. Woodley dropped his left hand and Paul just whacked him with all his might. Spectacular #PaulWoodley2

I am not responsible for any of this!!!

That was legit scary for Woodley. He was down for a while. And even when he stood up he was out of it. And then his corner told him what happened and he kept saying “no, no, no.” Had no idea.

Pure insanity. What a shot.

Jake Paul promises to eff up Jorge Masvidal and Nate Diaz if they can get out of their contracts with “Daddy Dana.” 2021 is wild y’all. #PaulWoodley

Wow congrats to @jakepaul
But always fighting little guys. Please come and fight a HWY with power and chin! 💯👊💯 pic.twitter.com/0f029snt6H