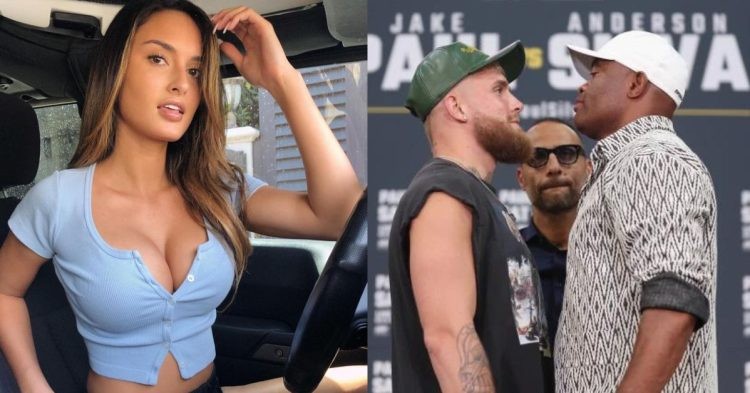 Jake Paul will take on the UFC legend Anderson Silva in a boxing bout on 29th October. Many analysts have already put out predictions for this fight. But this time, Paul’s girlfriend Julia Rose also sent a message and predicted that Paul will knock out Silva.

Recently, Rose was asked by Fight Hype about her opinions about the upcoming fight. This is by far the biggest test in Paul’s boxing career. But Rose is assured that Paul is prepared and will give his absolute best. She said:

“Saturday you can expect Jake to get in there and give his absolute all. We have seen what Jake’s absolute all does – it knocks people the fuck out.”

When she was asked about her predictions, Rose replied without any hesitation that Paul will knock out Silva. Rose added:

“I won’t give any prediction what round but I’m expecting Jake to get there and knock Anderson Silva the fuck out.”

Recently, Paul stated in a YouTube video uploaded to his channel that he is on a break from his relationship with Rose. According to Paul, he is very much focused on training for this fight and said that Rose was “kicked out of the training camp.”

This shows how much Paul is dedicated to this fight as this is the biggest fight of his professional boxing career. Silva is known for being a world-class striker and Paul will have to be careful as he faces the most dangerous opponent he has faced so far.

Jake Paul has made some big improvements in his striking game ahead of his fight with Anderson Silva. Paul’s improved boxing skills were on display in his recent fights against Tyron Woodley and Ben Askren, where he knocked both of the former UFC fighters out.

However, Paul will face a very dangerous striker in Anderson Silva as the ‘Spider’ has been considered one of the greatest fighters of all time. His fighting style and head movement skills are so amazing that it almost looks unreal.

Despite that, Silva is past his prime now and will fight against a younger fighter in Paul who has demonstrated that he can knockout top athletes with a single punch. If ‘The Problem Child’ wins this fight, he will certainly be considered a world-class boxer.

Moreover, after the recent terms agreed between the two men, if Paul loses to Silva, he will have to fight the UFC legend in a kickboxing fight next. This will be worse because Silva is one of the best kickboxers with lethal skills.

When he fought the middleweight champion Israel Adesanya in the UFC, he went toe-to-toe with Adesanya at UFC 234. Even though he lost via decision, it was evident that Silva is still one of the best strikers. But whoever wins this fight, fans will be happy to see the UFC legend in action against the famous Youtuber-turned-boxer.