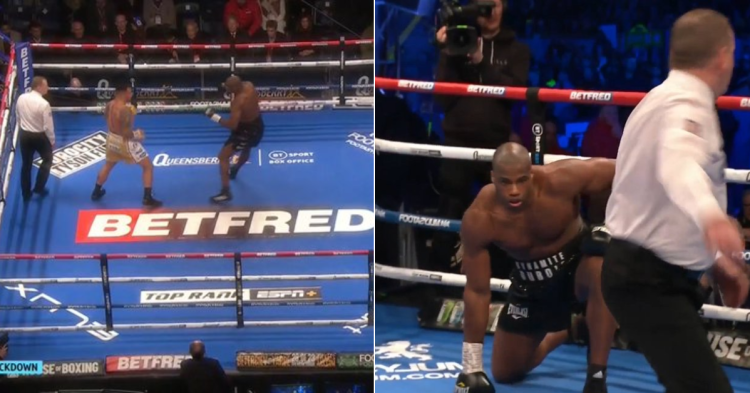 Daniel Dubois headlined the undercard of Tyson Fury vs Derek Chisora 3 in his first title defense of the WBA (Regular) heavyweight title against Kevin Lerena in London. In what was a comeback for the ages, Dubois picked up a TKO win over the South African boxer to defend his WBA heavyweight gold. However, the win did not come without some serious trouble in the first round where the British boxer took to his knee a record three times.

Kevin Lerena rocked Dubois in the first minute of the very first round, sending Dubois stumbling on the canvas. It was later revealed that Dubois suffered a serious ankle injury during the exchange. Over the course of the next two minutes, Dubois looked hesitant and got knocked down two more times, sending shockwaves in the world of boxing. It goes without saying, Dubois was the favorite going into the bout.

The moment when Daniel Dubois looked to have hurt his right ankle 😩#FuryChisora pic.twitter.com/4gyjstOgno

Daniel Dubois in huge trouble against Kevin Lerena, who had him down 3x in 1st. Dubois struggling with movement.

What is going on with Daniel DuBois? Holy smokes

This is incredible. Kevin Lerena puts down Daniel Dubois three times in the opening round. He’s not right at all.

Kevin Lerena knocks Daniel Dubois down THREE TIMES in round one. Wow.

Heading into the second round as well, Dubois lacked confidence in his punching. Despite being known for his incredible power, Dubois showed reluctance to engage with Lerena.

However, after a good round 2, Dubois put his foot on the peddle as he knocked down Lerena with a vicious right hand in the closing moments of the third round. It was only a matter of seconds before a series of unanswered shots including a lethal uppercut prompted the referee to stop the fight.

Has Daniel Dubois ever lost in his boxing career?

Daniel Dubois is 18-1 with the sole loss of his professional boxing career coming against Joe Joyce back in November of 2020. It won’t be wrong to say that Dubois came quite close to tasting defeat for the second time after that first round against Kevin Lerena. It looked like it was over, but not for Dubois who scripted a comeback for the ages in his first title defense of the WBA gold.

Daniel Dubois has shown some progress from that loss to Joe Joyce in 2020, despite picking up a knee injury the first, he showed great heart and continued to stick at it before stopping Kevin Lerena in round 3.

A complete change after taking the knee against Joyce. #Boxing

Daniel Dubois stops Kevin Lerena in the third round after hitting the canvas three times in the first round. A remarkable comeback 👏🏼

It’s safe to say Daniel Dubois will find himself against the more notable names in the heavyweight division. Heading into this fight, Dubois expressed his interest in a rematch with Joe Joyce. As for who will fight next? Only time will tell.

Cristiano Ronaldo Before and After Pictures: Did He Get Plastic Surgery Done?