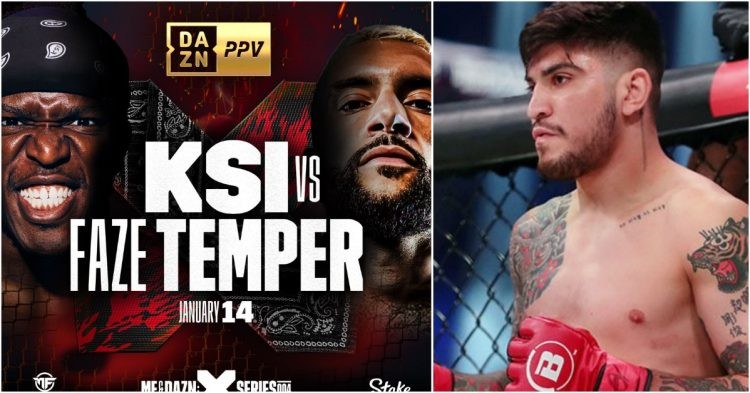 Dillon Danis pulls out of the KSI fight. (Credit: Twitter)

With only just days left, Dillion Danis has pulled out of the fight against KSI. They were set to face each other in a boxing match on 14th January. But as things stand, the fight has been canceled.

Previously, the British YouTuber-turned-boxer KSI was set to face off against unbeaten jiu-jitsu black belt Dillon Danis at the OVO Arena in London. Unfortunately, what many predicted, just came to pass and Danis pulled out of the fight at the eleventh hour.

In response to the news, KSI tweeted, “The show must go on. I’m still fighting January 14th.” Dillon’s demeanor in the lead-up to the fight has been callous and flippant. This was visible when he revealed last month he had no coach and wasn’t sure if the fight was an exhibition or a professional bout.

KSI’s manager, Mams Taylor spoke about Danis and about the matter in more detail. In an interview with Misfits boxing, He said, “The real reason is, from what they said to me, that he’s underprepared. He has no coach, he might be struggling with weight even though there’s no rehydration, he has not been able to find a team that’s going to support him to bring him into the fight.”

Further, Taylor added, “I never thought that someone who cares about his reputation or what people think of him as much as he does, I didn’t think that this would be something despite many people saying the opposite. They said he wasn’t going to show up to the fight and they were right.”

Who is KSI going to fight now?

Fortunately, having encountered a similar problem in the past, KSI was better prepared this time around. Previously, JJ faced a similar issue in August 2022 when Alex Wassabi pulled out of their scheduled bout and was replaced by two opponents. On that occasion, KSI faced rapper Swarmz and journeyman boxer Luis Pineda on the same night.

Now with Danis out of the equation, many have been anticipating who the replacement will be. Interestingly, there have been a few names like WBA-ranked light-heavyweight Joe Fournier, King Kenny, and Anthony Taylor to name a few. However, it appears that KSI will now be fighting FaZe Temperrr on Jan 14th.

Although not the most difficult opponent, the fight will at least be a step up in competition and serve to be good practice for KSI as he targets his ultimate opponent, Jake Paul. Do you think that Temper is a valid replacement? Will KSI be able to catch up to Jake Paul with this fight? Leave us your thoughts in the comments below.