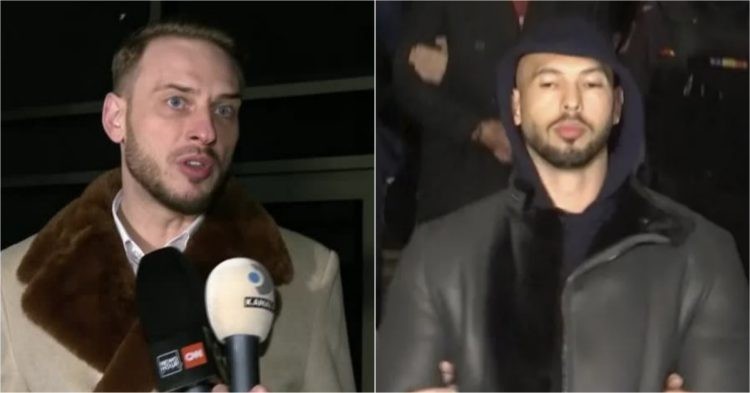 Andrew Tate has spent about 10 days in detention. Top G and his brother Tristan Tate were apprehended from their Romanian property on December 29, 2022. Reports later revealed that Tate’s accomplices Luana Radu and Georgiana Naghel were also taken away by the Romanian police. Till now, there was no insight for the fans on the case. However, Tate’s lawyer has finally given the fans some context.

Eugen Vidineac, one of Tate’s lawyers, recently gave an interview in Romania. YouTube channel, Gândhul, got a hold of the video and translated the whole segment. In it, Eugen finally presented the defendant’s perspective on the matter. He argued that the defense team was not given enough time to review the evidence against them. Hence, they were having a hard time making an apt case.

In the 37-minute interview, the legal representative also gave an update on what the 36-year-old’s mindset was like during his initial detention. According to the lawyer, Andrew was unsettled, and understandably so. Although Tate was extremely calm and even communicated via his famous hand gesture, it does appear that Tate is infuriated with the whole ordeal.

Vidineac revealed, “I see them every day. First of all, it took them some time to understand why they were there. I’ve told you the thing about this whole transformation, reversal of the situation, starting on 29 December.”

He continued, “If on 11 April 2022, when I am a witness, a house search takes place, all the computer systems in my house are seized, I cooperate with the criminal investigation authorities, I make available, I make requests for the return of part of my property, so that this case can be dealt with swiftly, as it may affect my image and nothing happens.”

‘There are no new facts in the prosecution documents between 11 April and 29 December. We are not talking about new fact or acts by the prosecution during the reference period… These people obviously don’t understand anything anymore. Sir, what prompted the prosecution body not to take such an action or throw out such a procedural quality on April 11 and prompted it on December 29,” the lawyer questioned. (Quotes Credit: Gândhul)

Andrew Tate will be presented before the court on January 10

Andrew Tate is certainly not sitting back and letting the situation play out. Top G is fighting back with the aid of his legal team. Tate’s lawyer also argued that there is no ground for the allegation made against his client. Eugen Vidineac revealed that there are three specific charges against the former-kickboxing champ. R*pe, human trafficking, and organized crime.

In terms of the first allegation, Eugen revealed that there is no credible evidence against Tate, other than the victims’ statements. He also countered the human trafficking allegations by stating that the alleged victims did not come to Romania against their will. While one was an American citizen, the other came from the Republic of Moldova.

Vidineac also stated that the profiles of Andrew and his associates did not match the allegations of organized crime. According to him, the judicial system in the country should grant him release on December 10. Some recent reports stated that Tate’s bail plea was not dismissed by the court. Tate’s lawyer’s statements basically confirm the news.

Tate got out of detention recently and visited the hospital for some medical tests. However, some reports claim, Andrew could have been moved against his will. But Andrew Tate can walk away as a free man on December 10, if the court buys into his lawyer’s arguments. So it remains to be seen what happens in the coming few days.