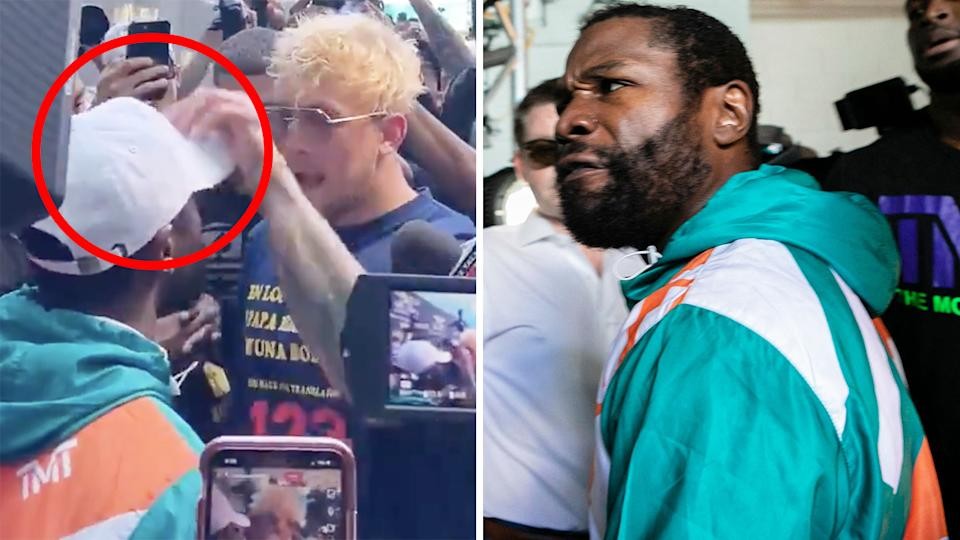 Floyd Mayweather takes on Logan Paul in an exhibition match on June 6th. Not so long ago fans were not that intrigued by this unusual matchup but after what happened at the press conference the fans will certainly be tuning in to see Floyd box Logan.

Floyd Mayweather and Jake Paul got into a nasty brawl after the press conference when Jake Paul tried to steal Mayweather’s hat. Mayweather and his bodyguards chased Jake paul and assaulted him before they were separated. Though Logan Paul was not a major part of this altercation he did try to save his brother while Jake was down on the ground and surrounded by Mayweather’s bodyguards.

Though it’s not unusual for fighters to get physically involved with other fighters before the fight this particular incident does raise some eyebrows.

From some footage of the brawl, it can be seen that Mayweather did not land a single punch on Jake Pauk during the brawl. It was his bodyguards who swarmed Jake Paul and took him down at a moment. Mayweather did try to grab Jake Paul’s hair and do some damage but he did not throw a punch even if he had the opportunity to do so.

Besides that, Jake Paul releasing various types of merch right after the brawl is a brilliant business move. But, it might also mean that they knew this brawl was going to happen. Now whether Floyd Mayweather is in this “fake brawl” with Jake Paul is still unknown but it’s hard to ignore some of the obvious signs. Even Logan Paul suspected that this whole thing was staged after the brawl. Jake Paul stated:

“I think that was a setup I am not gonna lie. he had his boys get me before I could even get involved. Jake took his hat. He told me he would do it. I told him not to.”

Read More: Jake Paul concerned for his life after brawl with Mayweather

Fans also noticed that Jake Paul suffered a black eye after the brawl with Mayweather but it’s very unlikely since it does take time to get a black eye after getting punched or absorbing some damage to the eye. If that was not the case then every time fighters get into the octagon or boxing ring they would have come out with black eyes due to the punches they have absorbed during the fight.

Now, these are some signs that suggest Jake Paul and Floyd Mayweather got into a scripted fight to build up the hype for the Logan Paul fight and also make the fans speculate for a potential Mayweather vs Jake Paul fight in the near future. After all, Jake Paul is a bigger name than Logan Paul in the world of boxing and fans are going to tune in to watch him lose.

Irrespective of that, the brawl has now made Floyd Mayweather a huge fan favorite as he taught Jake Paul a lesson about why you should not mess with a real fighter.