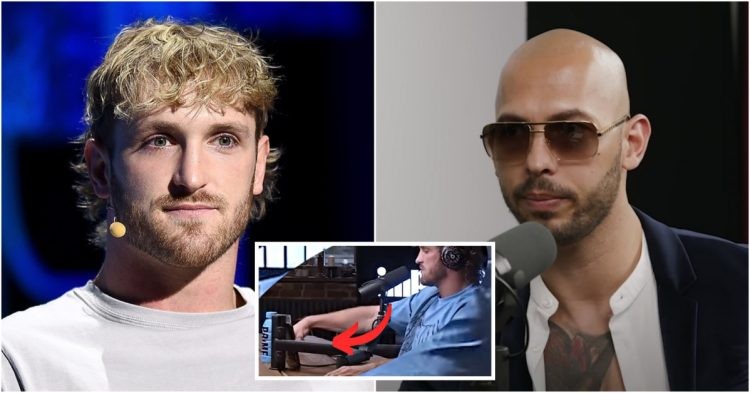 Both Andrew Tate and Logan Paul are currently in the headlines for all the wrong reasons. While Logan is currently dealing with his allegedly failing internet currency project CryptoZoo, Tate is in detention. He was taken into custody on 29th December 2022 in Romania. Subsequently, he was put in detention for 30 days as the police are investigating him for human trafficking and other charges.

But, before the recent activities, both Logan and Andrew had a constant back-and-forth. The former kickboxer was initially in talks to fight Logan’s younger brother Jake Paul. But, Logan always had a disliking for Tate. Andrew has a controversial personality and his messages to the youth can sometimes be questionable. Logan thought Tate is a dangerous influence on young people.

However, before his recent trouble with the law, Tate had a proper to go at Logan. In a recently surfaced interview, Tate alleged The Maverick was only disagreeing with him because he was afraid of getting canceled. But that was not all, Top G also accused him of making his pre-written statements. As per Tate, Logan’s words were not exactly his own.

Tate said, “the worst thing about this is not what he’s saying. Its that he doesn’t really believe it. Logan is a man who says things because he thinks he is supposed to say them. Which makes him an agent of the matrix… If I say he’s a bad man Susan, can I keep my account?”

Logan previously made some questionable remarks on Andrew Tate’s relationship with this friend Adin Ross. Tate also relatiated with insults of his own. Aside from calling Logan low IQ, Tate also accused him of taking steroids.

Did Logan Paul fake his apology?

Andrew Tate and Logan Paul never really liked each other. While Logan had a great urge to fight him, Tate was not backing down. Tate accepted the challenge as well. Hence, two rivals accusing each other is not a new occurrence. However, the accusation against Logan of reading a script while talking is nothing new. It also happened in 2018.

Much like the start of 2023, 2018 also started on a rough note for the 27-year-old YouTube boxer. On December 31st, 2017 Logan put out a video that shocked the world. He put out the infamous vlog which featured the footage of a suicide victim in a Japanese forest. Afterward, Logan faced a lot of repercussions which hurt him financially. As a result, Logan had to apologize.

He put out, what seemed to be a heartfelt apology. However, recently, a YouTube user by the name of Theodore Patterson found proof of the 27-year-old reading off a script. They pointed at the 57-second mark of the video and wrote, “he is obviously reading this off of a script.”

It is important to mention that there is no proof of Logan reading his statements off a teleprompter, a script. or off his mobile phone. Hence the accusations against him are just mere speculations.

But what is your take on it? Do you think Andrew Tate is right about Logan Paul? Let us know in the comments down below.