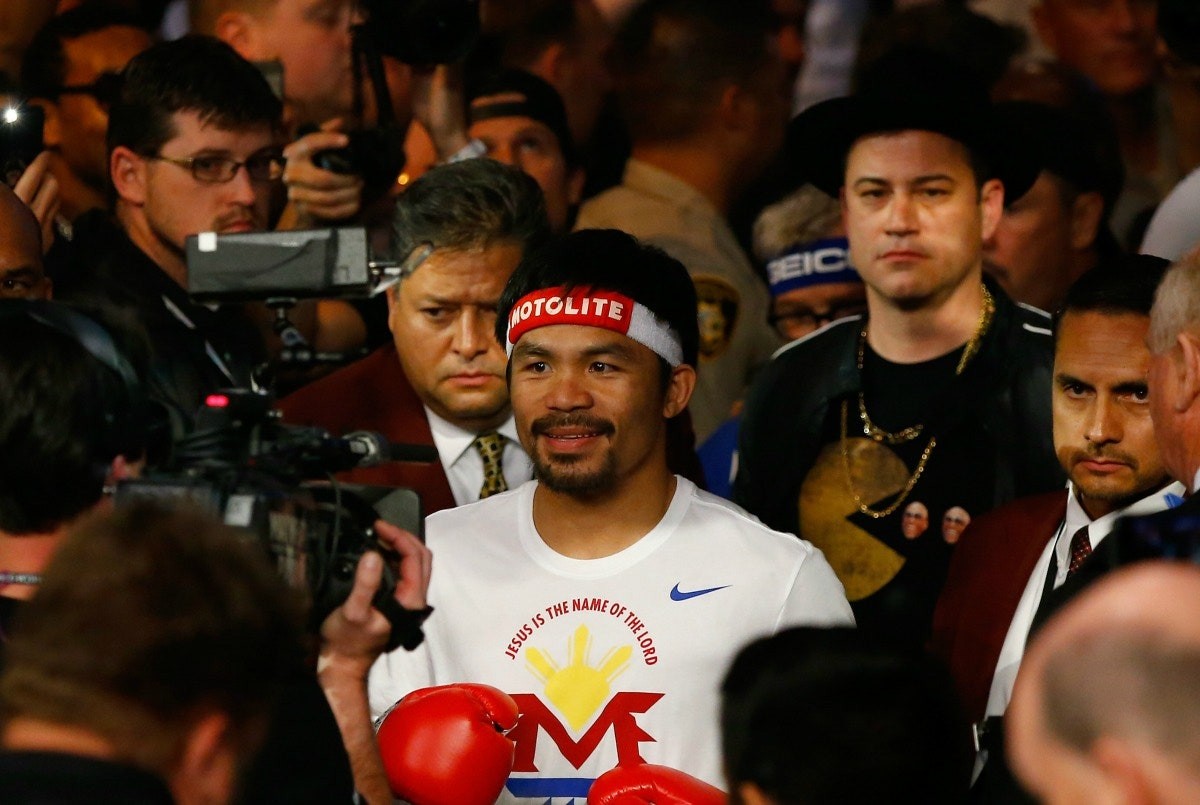 Manny Pacquiao is widely regarded as one of the greatest boxers to have ever stepped inside the ring in this generation. Owing to the fact, that he was the pound for pound the best in the world at one point in time. Moreover, he is the only boxer to have won 12 major titles in 8 different divisions. As a result, he will go down as a Hall of Famer in the sport of boxing after his retirement.

Apart from his greatness in boxing, the Pac-Man is a man with numerous talents and passions because the Philippine boxer is a congressman, actor and also a singer. Consequently, let’s take a look at some of the songs that Manny Pacquiao has walked out to in his boxing career.

As mentioned above Pac-Man is a man of several talents. As a result, Manny Pacquiao recorded a song named Lalaban Ako Para Sa Filipino. The meaning of this song is ‘I fight for the Filipino people.’ He released this song a few weeks ahead of his mouthwatering clash against Floyd Mayweather. Moreover, he made an announcement that he will walk out to this song against Money.

The music video of this song was aimed to be a tribute to his fans back in the Philippines and the struggle many suffered after the devastating Typhoon Haiyan. He walked out to his recorded song during his epic clash against Floyd Mayweather. Speaking about the result, Manny Pacquiao fell short in this epic clash as Floyd Mayweather won the fight via unanimous decision.

2. We will rock you- Queen: Manny Pacquiao vs Oscar De La Hoya

Manny Pacquiao entered into the ring against Oscar De La Hoya in 2008 to this popular song called ‘We will rock you’ composed by Queen. Moreover, this song has gained legendary status and hence different stadiums and boxing rings use this as an anthem to pump up the audience.

Consequently, Pac-Man was inspired as he entered the ring and dominated the bout against Oscar De La Hoya. In the eighth round, the Philippine boxer battered the Mexican fighter and as a result, Oscar’s corner threw in the towel and Manny Pacquiao won the fight via RTD.

Thunderstruck is one of the biggest hits of AC/DC. Moreover, this rock song stayed on the Billboard charts for more than a year and was on top of the list at one point in time. Subsequently, HBO has used Thunderstruck while showing Pacquiao’s highlights before his entrance against Shane Mosley.

Further, the Filipino has also used this as his walkout song for his boxing bout against Keith Thurman in 2019. Manny fought 12 tough rounds but came out on top against Thurman as the judges declared him as the winner via split decision.

4. Eye of the Tiger – Survivor

Eye of the Tiger was written as the theme tune for the Rocky 3 movie. Subsequently, many boxers started using this as their walkout music. Manny Pacquaio was one of the boxers that developed a liking to this song and hence he used this as his walkout song for several fights.

Pac-Man went a step further as he entered the ring to this hit theme song sung live with Jimi Jamieson, the lead singer of Survivor. The Philippine boxer has walked out to this song against Shane Mosley, Juan Manuel Marquez and many other boxers in his career.

Roar was one of the top songs of Katy Perry in 2013 and it won several awards and was also nominated for the grammy’s. Manny Pacquiao walked out to this Katy Perry song for his fight against Brandon Rios for the vacant WBO welterweight title.

Pac-Man dominated the bout for twelve rounds and comfortably won the fight via unanimous decision. After winning against Rios, Pacquiao decided to use the same song for his rematch against Timothy Bradley Jr. This song turned out to be a lucky charm as Manny successfully avenged his loss by winning the rematch via unanimous decision.