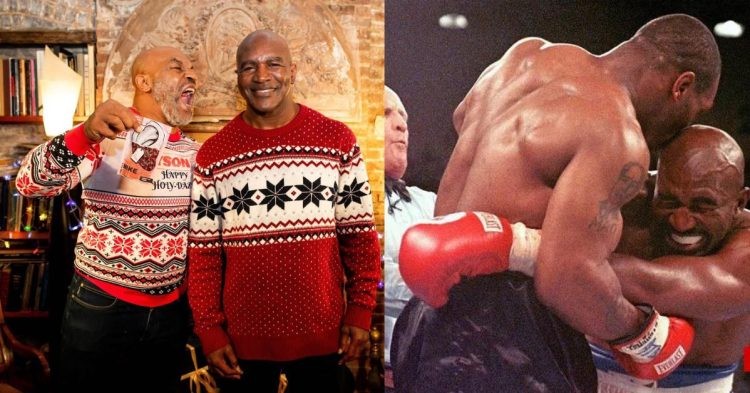 Boxing icons Mike Tyson and Evander Holyfield have buried their rivalry and teamed up to release new cannabis edibles, called ‘Holy Ears’. Interestingly, the weed gummies are shaped like an ear, but with a missing chunk. This is a reference to the iconic 1997 fight between the two legends when Tyson bit off Holyfield’s ear.

In this new venture, Tyson teamed up with his former rival Holyfield. As a part of his weed edible product ‘Mike Bites’, Tyson will introduce the new edibles on Black Friday, 25th Nov in the United States. Talking about the product, Tyson said: “From Mike Bites to Holy Ears, now cannabis fans around the world can experience the same wellness benefits that plant-based products have brought me.”

“It’s a privilege to reunite with my former opponent and now long-time friend, and turn years of fights and knockouts into a partnership that can make a positive impact and heal people.”

Mike Tyson on teaming up with Evander Holyfield to sell ear-shaped cannabis edibles with a chunk missing: “If I was on cannabis, I would’ve never bit his ear.” pic.twitter.com/jHCHZVpRAT

Tyson has been quite open about his cannabis use and stated that it helped him go through tough times. To promote the healthy benefits of cannabis, Tyson’s company launched weed edibles in 2021. Later, Holyfield joined him in this venture, when he was asked by Tyson.

Mike Tyson first faced Evander Holyfield back in 1996. Tyson lost his heavyweight title after getting knocked out by Holyfield but complained of Holyfield head-butting him throughout the fight. Tyson attempted to seek revenge in their rematch which happened the following year.

In the second fight, Tyson was disqualified and fined by the Nevada State Commission for an outrageous action that shocked the boxing world. Tyson got frustrated and in the heat of the moment, he bit off Holyfield’s ear.

A chunk of Holyfield’s ear was left on the canvas and the fight was called off. This action cost Tyson his boxing license and $3 million. Tyson later explained that Holyfield was headbutting him and he got frustrated.

Tyson later reflected upon that incident in 2020 and said: ‘I bit him because I wanted to kill him. I was really mad about my head being bumped and everything. I really lost consciousness of the whole fight. It took me out of my fight plan and everything.’

However, they have squashed their beef now and have become good friends. Holyfield and Tyson often joke about that incident. Now, they have opened this new venture with a tribute to that incident.

Holyfield had never tried cannabis before until he was offered a sample of ‘Holy Ears’. When he was asked about his experience, Holyfield stated that it put him to sleep. The weed edibles come in ‘Cherry Pie Punch’ and they will be available to purchase shortly.

According to Holyfield, the gummies taste delicious, and talking about the product, he said: “I wanted to make sure I got home and didn’t do anything to anyone. I ate it and laid down. I woke up the next morning and was like, whoa.”

Tyson is the co-founder of his cannabis company, Tyson 2.0. He is also the chief brand officer and has been promoting this product since he launched it in 2021. Tyson stated that since trying weed, he has changed both physically and mentally.

To share the wonderful gift of weed with others, Tyson released the cannabis products. Compared to his younger version, Tyson is now a very calm man. He was known for his ruthless and savage personality, but now he is a different man. Tyson has his podcast where he discusses about various things with his viewers.